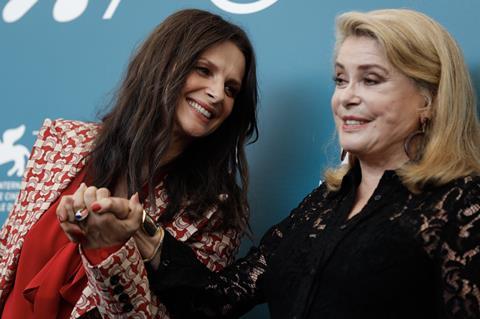 The generally well-received feature made for a fitting opening film amid the ongoing debate over female representation at the festival, spurred by the fact that just two of the 21 films in competition this year are directed by women.

Deneuve plays a steely cinema diva who has put career ahead of friends and family throughout her life, opposite Binoche as her long-suffering, screenwriter daughter.

The secondary male characters – played by Ethan Hawke, Jacky Berroyer and Alain Libolt – are captured mainly against the domestic settings of the kitchen and the bedroom and then are either cooking, pandering to the demands of Deneuve’s character or looking after the kids.

With its exploration of the mother-daughter relationship, the complications of juggling motherhood and career and female friendships, The Truth easily passes the strictures of the so-called Bechdel test, which requires a film to have more than two female characters who talk to each other about something other than a man.

Kore-eda also gently alludes to the MeToo debate when Deneuve’s character expresses her disdain for actresses who publicly embrace social or political causes – in a scene reminiscent of her own tussle with the MeToo movement – while Binoche’s character accuses her mother of sleeping with a director to steal a role from a late best friend.

In the backdrop, the ongoing debate over the fact that just two of the 21 films in competition this year are by women – Haifaa al-Mansour’s The Perfect Candidate and Shannon Murphy’s Babyteeth – dominated the opening day of the festival.

At the opening news conference, artistic director Alberto Barbera defended his selection and reiterated his belief that quotas are not the way forward to improve female representation at festivals and the wider film industry.

“It would mean that the only criteria that needs to apply in the selection process, which is the quality of each film, would matter less,” he said.

“Other criteria, be it political, social or anthropological or ethnological factors, in my opinion are unacceptable in the selection process, otherwise we would need to introduce quotas for all minority groups.”

Argentinian filmmaker and jury head Lucrecia Martel widened the debate, however, saying that while she did not like the idea of quotas they seemed the only measure that could change the current situation.

“I don’t see any other way to make this industry start thinking differently and look at films directed by women in another way,” she said.

Martel asked Barbera whether he would consider a temporary introduction of a 50-50 rule for the selection. He dismissed the idea, adding just 23% of the 1,850 films submitted for selection had been directed by women.

The festival director also responded to questions around his controversial decision to invite Roman Polanski’s An Officer And Spy to competition, given the sexual assault charges against the director related to his having unlawful sex with a 13-year-old girl in Los Angeles in 1977.

Polanski pleaded guilty to the charges but then fled the US, fearing he faced a long prison sentence. The 86-year-old, Paris-based director will not be attending Venice as Italy has an extradition treaty with the US, which could result in him being arrested and flown back to the US.

Barbera stood by his decision to invite the film, saying that Polanski in his opinion was “one of the last masters in European cinema” adding, “we cannot wait 200 years to decide whether his films are great or easily forgotten.”

Jury president Martel – whose fllms include female-focused dramas such as The Headless Woman and La Ciénaga – revealed she felt torn by the debate, saying she was still mulling whether to attend the gala for the film or not.

“I’m not sure whether I’ll attend the gala as I represent many women who are fighting in Argentina in similar cases,” she said. In an indication of the sensitivity around the topic, Martel later put out a statement clarifying her comments via the festival’s press office.

“According to some reports after today’s press conference, I believe my words were deeply misunderstood,” it read.

“Since I don’t separate the work from the author and I have recognised a lot of humanity in Polanski’s previous films, I am not opposed to the presence of the film in competition,” it continued. “I don’t have any prejudice towards it and of course I will watch the film like any other in the competition.”

”If I had any prejudice, I would have resigned my duty as the president of the jury.”

The first major feature film to emerge from Saudi Arabia since the country’s lifting of its 30-year cinema ban at the end of 2017, The Perfect Candidate is another strong female-focused film about a young doctor who breaks with convention when she runs for local office in her impoverished backwater town.

The Horizons sidebar continues with Philippine director Raymund Ribay Gutierrez’s domestic violence drama Verdict and Italian director Carlo Sironi’s Soleexploring theme of fatherhood through the prism of a young man who finds himself caring for a baby caught up in an adoption scam.