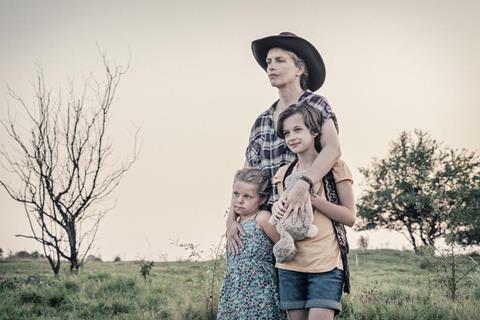 Mothers would do anything for their children, but few go to the extremes exhibited by the heroine of Pelican Blood (Pelikanblut), an endlessly intriguing drama that takes plenty of narrative risks, although to diminished returns. Nina Hoss is superb as a horse trainer engaged in a fraught battle of wills with her newly adopted daughter, who may be troubled or simply evil, and director Katrin Gebbe delivers a prickly character study that occasionally doubles as a horror film. But Pelican Blood ultimately runs too long, extending its metaphors to such a degree that the story loses its tether to believable human behaviour.

This Venice premiere will court buyers on the strength of Hoss’ international acclaim. Much like Gebbe’s feature debut, 2013’s Nothing Bad Can Happen, Pelican Blood may inspire polarising responses, which will help boost visibility for a difficult, provocative follow-up.

Hoss plays Wiebke, the single mother of Nicolina (Adelia-Constance Ocleppo), a loving nine-year-old girl she has adopted. Wanting another child, Wiebke goes oversees to adopt Raya (Katerina Lipovska), an angelic-looking five-year-old sister for Nicolina. But upon arriving home, Wiebke notices that the girl exhibits upsetting violent tendencies, endangering all those around her.

For much of the film, Pelican Blood allows the roots of Raya’s unpredictable monstrousness to remain mysterious, presenting the audience with three possible, equally disconcerting possibilities: she has emotional problems; she’s just utterly wicked; or perhaps it has something to do with Wiebke herself. That third scenario connects to the film’s most gripping idea, which is that this single mother is being punished for her need to “rescue” others. In her work, she prides herself on rehabilitating hard-to-tame horses — although, as Wiebke explains, it’s usually not the animal’s fault but, rather, its rider’s — and Hoss articulates the quiet panic on the character’s face at the realisation that, in Raya, she may have met the one wild creature she cannot control.

Cinema has no shortage of demonic children, but Gebbe toys with our emotions, keeping us unsure what is causing Raya to act so volcanically. Consequently, Lipovska’s expertly bratty performance is exasperating, terrifying and, occasionally, heart-breaking because, like Wiebke, we don’t understand its origins. Raya grows darker and more unhinged — there’s a strong sense that, under the right circumstances, she’d kill Wiebke and Nicolina — but because Pelican Blood doesn’t have the trappings of a conventional horror movie, the events are depicted with a realism that makes them far more disquieting.

Nothing Bad Can Happen was also about the danger of unwavering belief, and in Wiebke, Gebbe crafts a character who steadfastly refuses to give up on Raya — who believes that, no matter what this young girl has endured, a mother’s pure love can redeem her — that she goes to increasingly ludicrous levels to prove that her faith hasn’t been misplaced. Pelican Blood knowingly strains credulity in its later reels, all to demonstrate Wiebke’s resilience — or is it arrogance? Hoss is such a supremely nuanced actor that we watch Pelican Blood both horrified and ensnared by the lengths Wiebke will go. Sadly, the film eventually runs aground due to implausible and fantastical plot points, although Gebbe and Hoss’ commitment to this primal maternal tale makes it hard to look away.