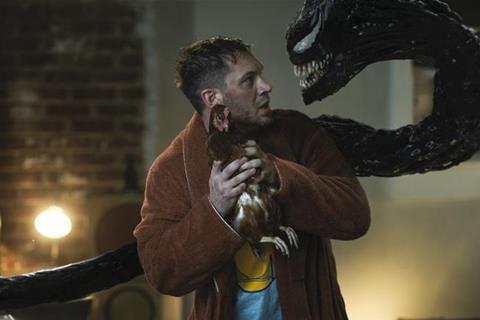 Venom: Let There Be Carnage

In another stirring exclusive theatrical release that will give confidence to exhibition and studios that forego the day-and-date route Columbia Pictures’ Venom: Let There Be Carnage opened to an estimated $90.1m for the biggest three-day North American debut of the pandemic so far.

The result will be especially gratifying to theatrical distribution advocates and box office observers as it exceeded the pre-pandemic $80.3m debut of its 2018 predecessor and for the first time overall North American box office combined to trail the same session in 2019 by less than 15%.

Tom Rothman, chairman and CEO of Sony Pictures’ Motion Picture Group, said: “We are so grateful to Tom, Andy, Kelly and all of the many gifted contributors who made such a unique and fun film. We are also pleased that patience and theatrical exclusivity have been rewarded with record results. With apologies to Mr. Twain: The death of movies has been greatly exaggerated.”

Andy Serkis directed the sequel from a screenplay by Kelly Marcel based on a story by Hardy and Marcel. Woody Harrelson plays Hardy/Venom’s nemesis Carnage and the cast includes Michelle Williams as well as Naomie Harries from No Time To Die.