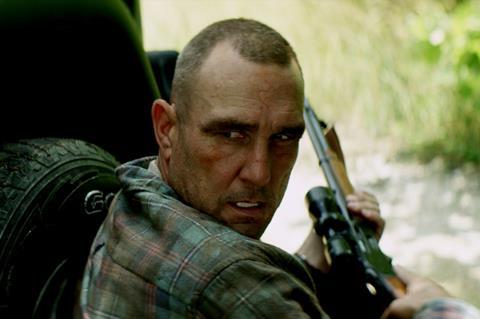 The two are working with co-producer Michael Downey and Michigan-based entrepreneur Gregg Gibson Williams, who provides the four G’s in 4G Vision and the financing.

The company’s first project is Wiper’s crime drama The Big Ugly starring Jones, which is set for theatrical and VOD release in the UK and US through Vertical Entertainment on July 24 and July 31 respectively.

They are also developing a $25m female-led action thriller titled Solstice about a woman’s redemption. Jones said the company had been in talks with Rihanna to play the lead.

“We got the script to Rhianna and she loved it,” he said. “It needs to be led by someone who is athletic, sporty and very popular, and we thought this could be her breakout movie as a lead actress. We made her an offer six months ago but tour dates and Covid mean that it hasn’t been possible.”

The film, which has also been written by Wiper, is being lined-up to shoot in Puerto Rico in September with a ”bloody big long list of actors” under consideration.

The company is also developing comic book adapation Noble, which Wiper will not direct. Jones is set to star as international spy called Jake Nobel who ends up working with two female agents who turn out to be his daughters from two different mothers.  It is based on the graphic novel by Howard Chaykin to which Jones acquired the rights in 2009. “It’s a new take on the James Bond kind of movie, and is very funny and light-hearted,” said the actor-producer. “Noble was with eOne but we’ve got the rights back.”

Jones explained how 4G Vision was bourne out of an ambition to generate strong roles for him to play and weighty features for Wiper to direct.

“I did a movie a few years ago called The Condemned with Scott Wiper for WWE Studios and we became very good friends,” Jones recalled of the 2007 film, led by Steve Austin. “A couple of years later, he came to me and said, ‘Look, you’re always playing the tough guy who gets killed and I’m the WWE director who made The Condemned. We’ve got to get up from under this stone’. That was our inspiration, to show people that he’s a good director and I’m actually a good actor.”

Jones, who moved into film in 1998 with Guy Ritchie’s Lock, Stock And Two Smoking Barrels, said they decided to make a feature about London gangsters who travel to the US backwaters, “basically, The Long Good Friday the other way round”.

Wiper then wrote the script for The Big Ugly in which London mob bosses invest in a West Virginia oil deal in a bid to launder dirty money but end up clashing with local criminals after one of their girlfriend’s goes missing.

“We put the script around Hollywood but it never got a big enough bite so I put my producer head on and went out to raise $3m,” said Jones.

The actor was eventually introduced to US investors Michael Angelo and Williams, CEO of jet engine manufacturer Williams International. “We showed them a taster trailer - made up of films I’d been in and others - to show them what kind of movie we had in mind and they loved it,” said Jones.

Williams was so taken with the concept that Jones said he chose to invest more, taking the budget up to $6m. “At that stage, I phoned Matthew Vaughn and asked for help,” said Jones of the UK-based  Lock, Stock producer and writer-director of Kick-Ass, X-Men: First Class and the Kingsman franchise.

Vaughn introduced him to regular collaborator Tarquin Pack, with whom he had produced films including X-Men: First Class and Kick-Ass, and Pack came on board as producer of The Big Ugly alongside US producer Karri O’Reilly.

Jones then turned to “using numbers I had in my phone” to attach actors Malcolm McDowell and Ron Perlman as grizzled mob bosses from both sides of the Atlantic. Jones also brought in Lenora Crichlow to play his girlfriend, having worked with the UK actress on ABC series Deception. The cast is rounded out by Nicholas Braun (Succession), Brandon Sklenar (Vice), Leven Rambin (The Hunger Games) and Bruce McGill (Lincoln).

The film shot in Kentucky in the summer of 2018 and will become one of the first new theatrical releases in the UK and US as cinemas reopen following the Covid-19 lockdown.

Outside of 4G, Jones said: “I’ve got an offer in England to do a movie with Andrew Loveday [the producer-director behind The Rise Of The Footsoldier franchise]. Andy’s a good British filmmaker and I’ve always said to guys like him that if I can help, I always will because that’s where I come from - independent British moviemaking.

“We all know the benefits of Hollywood but 4G Vision didn’t get help from Hollywood and we don’t want it. They just peel your orange, eat the contents and leave you the skin.”