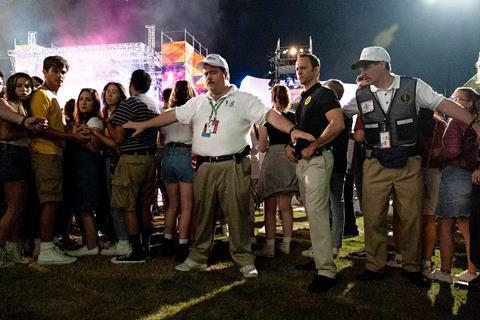 The furore over Richard Jewell has escalated in the run-up to the North American release of Clint Eastwood’s latest drama on Friday (13), as Warner Bros pledged to defend the film following a legal demand by an Atlanta newspaper that the studio issue a statement over the use of dramatic licence and run a disclaimer.

The Atlanta Journal-Constitution (AJC) disputes facts in the film and has taken umbrage over the depiction of its reporting on the 1996 Atlanta Olympics bombing. Of particular concern to the publication is a suggestion in the film that the deceased crime reporter Kathy Scruggs, played by Olivia Wilde, used sex to get a scoop that heroic security guard Jewell had become a suspect in the fatal bombing.

A letter sent on behalf of AJC to Warner Bros, Eastwood and others on Monday (9) read, “It is highly ironic that a film purporting to tell a tragic story of how the reputation of an FBI suspect was grievously tarnished appears bent on a path to severely tarnish the reputation of the AJC, a newspaper with a respected 150-year-old publishing legacy.”

The AJC argued that Richard Jewell “falsely portrays the AJC and its personnel as extraordinarily reckless, using unprofessional and highly inappropriate reporting methods, and engaging in constitutional malice by recklessly disregarding information inconsistent with its planned reporting.

“This, too, is the height of irony since all those involved in the film’s creation and dissemination and its false portrayal of the AJC are the ones who have acted recklessly and are engaging in constitutional malice.”

The legal demand makes clear that a defamation lawsuit could be in the offing should Warner Bros not comply with its request, and that given the film’s international distribution plan, papers could also be filed in the UK, Australia and France, among others.

After staying silent for most of the day, Warner Bros hit back in the evening. ”The film is based on a wide range of highly credible source material,” the studio said in a statement. ”There is no disputing that Richard Jewell was an innocent man whose reputation and life were shredded by a miscarriage of justice. It is unfortunate and the ultimate irony that the Atlanta Journal Constitution, having been a part of the rush to judgment of Richard Jewell, is now trying to malign our filmmakers and cast. ‘Richard Jewell’ focuses on the real victim, seeks to tell his story, confirm his innocence and restore his name. The AJC’s claims are baseless and we will vigorously defend against them.”

Further, the studio pointed out that there is already a disclaimer at the end of the film that reads, ”The film is based on actual historical events. Dialogue and certain events and characters contained in the film were created for the purposes of dramatization.”

Jewell is believed to have saved countless lives after he spotted a suspicious backpack in the Centennial Olympic Park midway through the Games in July 1996 and managed to evacuate the outdoor area. The bomb detonated, killing one person directly and leading to the death of a second person, and injured more than 100 others. Authorities exonerated Jewell later that year. Eric Rudolph was arrested in 2003 and imprisoned in connection with the bombing and other attacks across the southern US due to anti-gay motives. Jewell died in 2007.

AJC stood by Scruggs’ exclusive report that shortly after the evacuation, the Bureau focused its investigation on Jewell. In its legal demand it said subsequent reporting by AJC journalists “played a pivotal role in developing information that led to the exoneration of Mr. Jewell” after reporters ascertained Jewell could not have made a 911 call from a public pay phone used by the bomber that was several blocks away from Jewell’s actual location in Centennial Olympic Park at the time.

”Not only does the film omit the highly significant fact that the AJC’s reporting discovered the logistical impossibility of Mr. Jewell calling from the pay phone, the film actually substitutes the true fact with a false and fictional narrative in which Mr. Jewell’s lawyer (not the AJC’s reporters) is depicted unearthing the logistical problems. This was a key finding made by the AJC. The film’s intentional falsification of the facts in this regard, so they fit its predetermined storyline to portray the AJC as unethical, untrustworthy, and reckless, exemplifies the film’s malicious defamatory intent.”

Regarding Scruggs, who died in 2001, the letter said, “Ms. Scruggs was an experienced reporter whose methodology was professional and appropriate, in contrast to how she is portrayed in the film. She was a seasoned reporter who worked proactively within appropriate journalistic bounds. Despite the true facts, the film depicts her use of inappropriate and unprofessional reporting methods that included getting story tips from an FBI source in exchange for sexual favors.”

The letter said Scruggs has been ”reduced to a sex-trading object in the film”, adding: “Such a portrayal makes it appear that the AJC sexually exploited its staff and/or that it facilitated or condoned offering sexual gratification to sources in exchange for stories. That is entirely false and malicious, and it is extremely defamatory and damaging.”