A report has revealed the gender split of attendees at three of the world’s most significant film markets, the EFM in Berlin, the Cannes Marche du Film, and the American Film Market. 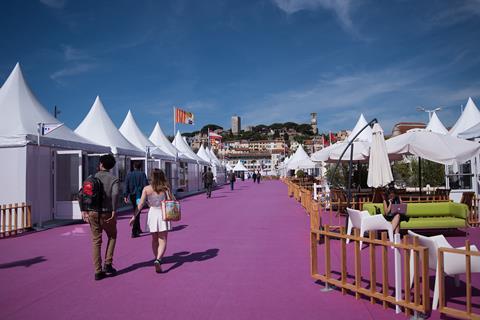 Only 35% of ‘high-status employees’ (i.e. decision makers) attending major markets were women in 2018, according to the report commisisioned by UK-based campainging agency Birds’ Eye View.

The report notes, “on the face of it, this [the figure] is encouraging” because it shows “the trend is upward”, however it points out at the current rate of increase it will take until the year 2040 to reach parity.

The data was collated by researcher Stephen Follows. It is based on 48,845 total attendees at the European Film Market (2009-18), Marché du Film (2009-18) or the American Film Market (2009-2017). It does not include delegates exclusively attending the festival components of Cannes or Berlin unless they also attended one of the other markets.

Mia Bays, who runs Birds’ Eye View, said the conversation about gender inequality in the sales and distribution sector was “underdiscussed”.

“You can’t just talk about the creative space without looking at the coal face,” said Bays. “We see films by women do well at festivals and get critical acclaim but then not reach the market at all. We think audiences are undeserved by what the film industry doesn’t back, we’re missing a lot of commercial potential as well as critical and cultural value.”

“The report backs up what we’ve been talking about. There are lots of women in supporting roles doing an enormous amount of the work, but the actual decisions lie with the people above them, who are more frequently male than female. We’re underserving our audiences because of these entrenched power bases,” said Bays.

Women accounted for 44% of the total number of professionals attending the three major film markets, up from 35% in 2009. However only 36% of all buyers, defined as ‘high status’ by the report, were women at the Cannes Marche du Film in 2018.

“Unfortunately, most women buyers I know do all the screenings, take all the meetings, read all the scripts, do all the coverage and generally run the acquisitions departments – but yet, crucially, are not in decision-making roles,” said a senior female theatrical acquisitions executive who asked to remain anonymous. ”Which of course is directly reflected in the resulting slates and reflected in cinema listings.

“It’s not just a lack of women in decision-making buyer roles; I do not know any female heads of distribution, which is another real problem. And to trace it all back to festivals – which is where buyers do a lot of acquisitions, there’s an alarming lack of heads of festivals or heads of programming who are women.

“Thus, the acquisition/distribution life-cycle is alarmingly senior women-free, and it’s a problem because the audience we are serving is 50/50.”

Cornerstone Films’ Alison Thompson, a member of the Birds’ Eye board, called the report as ”vital piece of research in the gender parity debate”.

“As we strive for richer, more distinctive, successful story-telling through film, it’s imperative to have greater gender diversity amongst decision-makers in all fields, including those in acquisitions, marketing and distribution,” said Thompson.

Of the top 18 countries which each sent at least 500 people to the three major markets between 2009-2018, Russia and China were best represented by women in high-status roles at film markets with 49% and 47% respectively. Germany and India were at the opposite end of the spectrum with 27% and 24% respectively. Russia also had the highest percentage of women in low-status jobs (85%) while India had the highest percentage of men (50%).

Mid-status jobs were closer to parity in the 18 territories, with South Korea employing the highest percentage of women (63%) and India the lowest (42%).

In sub-sectors of the industry represented at the three key film markets analysed in the report, distribution and production companies had the highest percentage of men in high-status jobs, with 71% and 69% respectively. Of the 12 sub-sectors analysed, only film commissions had a majority women in such roles with 52%, while publicity had 43% and film festivals just 41%.

All the sectors had a majority of women in their lowest ranks, with men only accounting for 20% of those working in low-status positions at film commissions.

Bays said that the increase of women in sales and distribution displayed in the statistics made her optimistic, but added change is not happening fast enough. “The distribution industry is really tough at the moment but there’s a sizable audience [of women]. Female audiences are strong and especially strong for specialised film, which is what we’re largely looking at here. We need parity to serve that audience.”