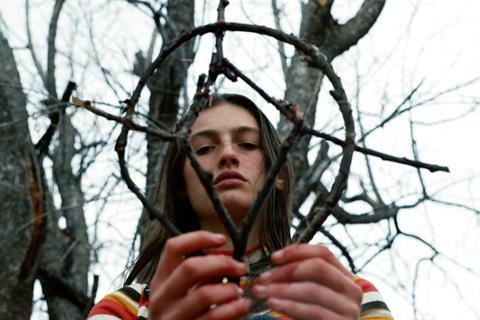 Toby Poser, Zelda Adams, and John Adams directed the film about 16-year-old Izzy (Zelda Adams, pictured), who leads an isolated life on a lonely mountaintop due to a rare sickness.

Questioning her illness and starving for company, Izzy sneaks down the mountain where she befriends a brazen older girl (Lulu Adams) and takes part in a drinking game involving a live worm.

When the drink awakes an insatiable hunger within, Izzy appeals to her mother for answers and discovers dark family secrets.

Hellbender marks the sixth feature from the Adams Family’s Wonder Wheel Productions, whose previous feature The Deeper You Dig opened in 2019.

Justin Timms, Yellow Veil Pictures co-founder, said, “Hellbender is unlike anything you’ve ever seen and we’re absolutely thrilled to team with the mad genius filmmaking family behind this one, and help find its audience around the world.”

The Adams Family added, “Yellow Veil embraces the creative energy and vision of our family and new film, Hellbender. We’ve admired the tone and boldness of YVP’s collection from the get-go, and the three of us are thrilled to be teaming up with them.”