Once I Entered A Garden 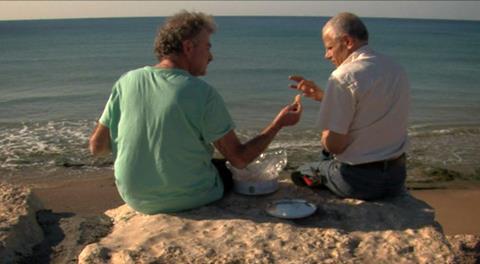 Israel’s maverick filmmaker, Avi Mograbi, is back with his own very personal brand of cinema, delivering a film that is neither documentary, mockumentary or fiction, but something vaguely in between. In Once I Entered A Garden (Pa’am Nikhnasti laGan), Mograbi - who writes, produces, directs, plays the lead and cuts most of his films - comes up with a film that is milder and much friendlier than usual, again addressing first and foremost audiences interested in the Middle East and its current state.

Though it pretends for a while to be a collection of preparatory footage for a film that will be made later on, the presence of cameras and of the cameraman Philippe Bellaiche soon becomes an integral part of the action.

Promoting his own personal utopian vision of a bi-national state in the space now occupied by Israel and Palestine, Mograbi implies this is the only valid, fair and logical option for the future of this area and the people living in it. A controversial issue, it fits perfectly into the spirit of Rome’s futuristic CINEMAXXI section and could easily find its way later, not only into politically oriented film events but also to television exposure.

A mini-budget production shot mostly in a private home and in Mograbi’s own small car, the film is basically a long conversation, spread over a number of days, between two long-time friends, an Israeli and a Palestinian.  They dig into their past, their antecedents, their roots and origins, only to find how closely intermingled their history is and how similar are the people living in this part of the world which has been spliced up into so many different but often fictitious nationalities. By the end, they bask in the glory of their own friendship, despite the political climate surrounding them and the twisted facts it has established, which would encourage confrontation rather than amiable understanding.

It all starts with Mograbi’s dream about meeting his own grandfather back in 1920.  He would like to make a film about it, but what language would they speak in it, he wonders? His grandfather lived at the time in Damascus and spoke only Arabic, Mograbi ‘s mother tongue is Hebrew and the only way he could possibly talk to him is by learning Arabic. Therefore he embarks on a series of lessons with friend and Arab teacher, Ali El Azhari, which finally becomes the backbone holding all the rest of the film together.

Moving back and forth between the past of their respective families and the present political conflict in which they live, a thorn in Ali’s side and somehow, the essence of his entire existence, the rambling conversation finally leads the two of them to Ali’s birthplace in the Galilee, in what used to be a centre of Jewish culture up until the 7th Century, then for hundreds of years an Arab village called Saffuriyeh, whose inhabitants were evicted in 1949 to make room for the present Israeli village Tzippori. Yasmin, Ali’s little daughter whose mother is Jewish, joins them on their trip up north and her lively presence often steals the show from the adults.

Narratively unrelated to the conversation, but underlining it emotionally, footage of streets in present day Beirut is accompanied by the voice of woman reading heartbreaking letters written over a number of years to her lover who broke up their affair to live with his family in Israel. Beyond the pain of the separation itself, these letters reflect the tragedy of people who once lived together, whether Jews or Arabs, torn apart by circumstances beyond their control, left to drift around aimlessly and forced to choose identities they feel no allegiance to.

Though it pretends for a while to be a collection of preparatory footage for a film that will be made later on, the presence of cameras and of the cameraman Philippe Bellaiche soon becomes an integral part of the action and as the film progresses, the pretense is largely dropped, useful only to justify certain narrative glitches and editing ellipses. Mograbi and El Azhari’s congenially free-wheeling conversation is delightfully free of any restraints and if politically it may look at times as an idealised, sentimental, approach to a devilishly knotty pack of dilemmas, it is worth listening to, even for those who will discount the message.