Nadav Lapid’s telling of his own life story 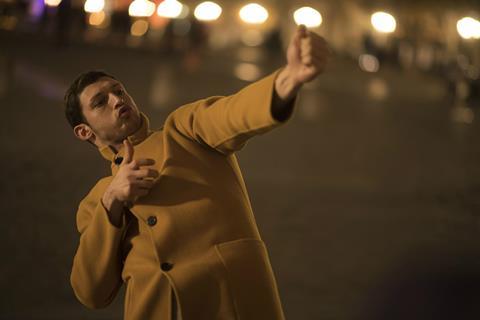 Israeli director Nadav Lapid made a lot of fans with his features Policeman and The Kindergarten Teacher, the subject of a recent US remake. He’s likely to alienate some of that following with autobiographical comedy Synonyms, but don’t think that Lapid isn’t prepared for that. His latest feature is a super-spiky, wilfully confrontational satire that pugnaciously mocks his own Israeli identity; the culture of France, where Lapid lived at the start of this century; and assorted conventions and decorums of art cinema. The result is mixed: buoyantly energetic at times, manically unamusing at others and decidedly overstretched.

Abrasive, grating, infuriating and other synonyms besides

Synonyms is likely to find festival exposure through sheer bullishness - and on the strength of an oddball debut performance from Israeli actor Tom Mercier - but it’s not an easy film to enjoy.

Synonyms starts with a flourish, as Yoav (Mercier), a young Israeli man newly arrived in Paris, finds himself, for farcical reasons, naked and freezing in a bath in an empty flat. He’s rescued, however, by the well-heeled French couple who live upstairs, Emile (Quentin Dolmaire) and oboe-playing Caroline (Louise Chevillotte). They equip him with a stack of money and some new clothes – including a singularly conspicuous mustard-coloured overcoat - and he heads off to start a new life.

Yoav has left Israel to get away from a country that he finds “repugnant, fetid, obscene, vulgar” – some of the words that give the film its title – and has sworn to abandon the language of his native land and only speak French. But despite his immersion in the French dictionary, Israel and its language won’t leave him alone: at one point, Yoav poses nude for a photographer who insists he shout out obscenities in Hebrew. He also finds himself involved with two macho Israeli security types, one of whom makes a point of aggressively asserting his Jewish and Israeli identity to bewildered Metro travellers in response to the rising climate of anti-Semitism in France.

At moments, Synonyms undeniably shows stylistic brio – a quiet dancefloor suddenly explodes with life to ‘Pump Up the Jam’ – or comic invention, as in an alarmingly spontaneous bout of wrestling between Yoav’s two tough guy friends. There’s also an enjoyably goofy flashback to Yoav’s life in Israel and an improbably showbizzy army ceremony.

But taken as a whole, the whole ‘kosher Candide’ routine surrounding not-quite-innocent-abroad Yoav proves repetitive and wearing. The satire belongs in the same self-mocking vein of Israeli satire as David Grossman’s acclaimed recent novel A Horse Walks Into a Bar, and also, in a timely way, addresses the contemporary paradox of an Israeli escaping to France at a time when so many French Jews are making the opposite journey. But there’s often a wearying degree of sometimes gratuitous-seeming stylistic play – Lapid has a thing for wild whip pans – and the French couple that Yoav bonds with, emotionally and sexually, are more than a little stereotyped. Emile is an effete litterateur working on an oeuvre called Nights of Inertia, Caroline an arty sexpot.

Nevertheless, tender, likeable support is offered by Dolmaire (from Arnaud Desplechin’s My Golden Days) and Chevillotte (Philippe Garrel’s Lover For A Day). Paris locations are also shot with a vim that emulates the early New Wave style of street shooting.

Satire apart, Synonyms stands or falls on the viewer’s response to Mercier, whose deadpan mien and odd vocal mannerisms, including a strangulated bark, give him a presence that can be immensely arresting, dressed or naked; but a two-hour running time places too much comic weight on his shoulders. Synonyms can’t be faulted on individuality or indeed rage, but many viewers are likely to find it abrasive, grating, infuriating and other synonyms besides.