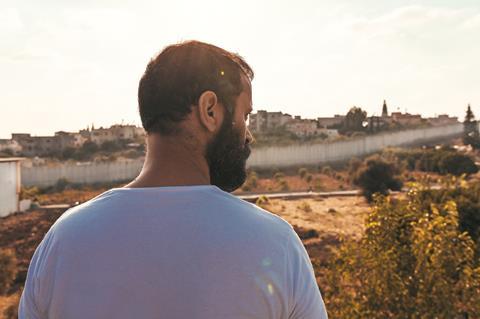 There are 200 meters and an unobstructed view between the balcony of Mustafa’s West Bank home near the city of Tulkarem and that of the apartment that his wife and three children share on the Israeli side of the border wall. It’s a gap that is bridged by phone calls, occasional visits and a great deal of love. But, as Mustafa discovers when his son has an accident, the wall is not the only barrier to crossing that short distance. In a road movie which deftly balances domestic drama and thriller elements, Mustafa, who temporarily lacks the necessary permit, must smuggle himself across to his family. A superb central performance from Ali Suliman as Mustafa is at the heart of this impressive first feature, which persausively captures the grinding indignities of day to day Palestinian life.

200 Meters screens in London having premiered in Venice Days, where it won the People’s Choice Award. A warm reception elsewhere on the festival circuit seems likely. Writer and director Ameen Nayfeh cut his teeth making short documentaries, and it shows in his eye for detail and knack for capturing the undercurrents of tension in social situations. But such is the force of Suliman’s screen presence, the eye is drawn back to him whatever else Nayfeh reveals in each scene.

The reasons behind the family’s separation are not laboured, suggesting that for many Palestinians such situations are par for the course. But beneath everything is an economic imperative – Mustafa’s wife works two jobs on her side of the wall but life in the West Bank would depend on his more uncertain income – and Mustafa’s pride. “You had the chance of an Israeli ID!”, she snaps at him. “I don’t want an Israeli ID,” he fires back.

The urgency of his need to make the journey to join his family puts Mustafa at odds with the others on the smugglers’ route who are more relaxed about the timing, content to while away hours sucking on cigarettes and chuckling at memes on the phone of teenager Rami (Mahmoud Abu Eita). Only Mustafa, it seems, is fully cognisant of the risks posed by the fact that one of the group being smuggled across is Anne (Anna Unterberger) a German filmmaker with a tendency to brandish her camera at inopportune moments. And of his fellow travellers, it is Mustafa who first realises that she is not quite she appears to be. It’s one of the film’s weaker elements that Anne is used as predominantly as a device rather than developed more fully as a character.

Although the majority of the film is taken up with Mustafa’s increasingly perilous attempts to cross the wall, the few scenes which he shares with his family carry a disproportionate emotional weight in the film. The palpable pleasure that Mustafa displays as he wrestles with his kids is something that he carries with him throughout the picture, an ache which is every bit as persistant as the lower back pain which nags him at work on a building site. And as his wife, Lana Zreik conveys a slightly barbed love for her husband which results from a situation and a seperation which she believes is at least partly his fault.

As Mustafa, Ali Suliman gives a terrific, satifyingly layered performance. The twitch at the corner of the smile when he talks to his daughters at night by phone hints at a well of sadness that he successfully hides from his family and perhaps even from himself. A score which trickles restrained melancholy at key moments adds to the impact of the Suliman’s undeniable magnetism.