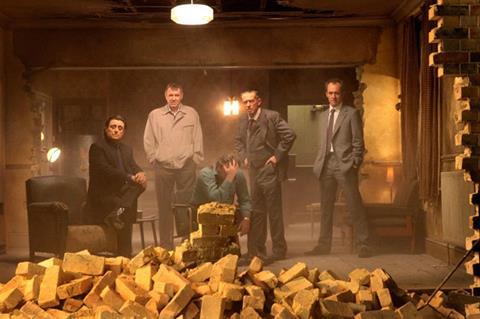 A long time in the releasing – this is set to finally go out in January 2010 through Momentum in the UK – 44-Inch Chest bares its pedigree early on: from the writers of Sexy Beast it is, like its predecessor, a masterclass in four-letter-wordery. It also features a central performance from Ray Winstone, this time somewhat over-the-top as a cuckolded husband whose thuggish middle-aged mates kidnap his wife’s lover.

Its often tediously rich language will make 44-Inch-Chest an acquired taste in any market, although smart turns from Ian McShane and an irascible, almost unrecognizable John Hurt in particular may ultimately win it cult status.

Winstone takes the lion’s share of 44-Inch Chest’s thesping action, and he certainly doesn’t hold anything back.

44-Inch-Chest has moments of brilliance – hallucinatory sequences later on give it a creepy air of dread  – and there’s a potential narrative hook in a strategically missing wife. But Venville places a toppling focus on Winstone’s character, underwritten yet over-monologued, which drains the film’s early energy and optimism. Breezy London exteriors give way to a dank single-room shoot at around the same time, conspiring to drain the air out of 44-Inch Chest.

Colin Diamond (Winstone) is the decidedly uxorious husband of Liz (Whalley). When she announces she is leaving him – told in flashback – he throws a few jarring punches and pretty soon her “Loverboy” (Melvil Poupaud) is being swiped from his French bistro and locked in a cupboard in a kitchen-sink-set room near the gas works.

Here he awaits his fate as the mentally-unravelling Colin makes up his mind whether to kill him or not.

This all sounds a little more linear than it transpires on screen; more clearly defined are Colin’s friends, a New Tricks-style band of seedy geezers way past their prime. Each is well performed despite the screenplay’s self-imposed limitations. Best is Meredith (McShane), the urbane gay gangster; Archie (Tom Wilkinson) is the nerd who still lives on his own; Mal (Stephen Dillane) is the tough nut with the one-liners; while Old Man Peanut (Hurt) spits out obscenities through an alarming set of false teeth.

It’s never clear how they all know each other, although it is equally evident that they have a rich and violent history together. Now they wait for Colin to make up his mind, watching him as he becomes more and more unhinged.

Winstone takes the lion’s share of 44-Inch Chest’s thesping action, and he certainly doesn’t hold anything back. But all the emotion and undoubted sincerity of his portrayal only highlights that there’s not much going on around it. As his friends wait, and the audience waits, Venville doesn’t seem entirely sure what everyone is waiting for, and the denouement comes with a distinct air of deflation.

44-Inch Chest is nicer to look at in the early stages, before it moves into stagey shots in the dingy den. Of note is a score by Angelo Badalamenti, which is pitching at an entirely different level to the picture – a good one, as it happens, so at least there’s that to focus on as Winstone repeatedly hits his marks.