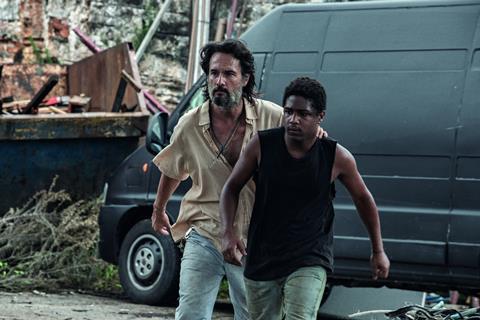 Faced with few options beyond back-breaking farm work, poverty and drudgery in the deep rural Catanduva region of Brazil, Mateus (Christian Malheiros, excellent) takes the offer of a job in Sao Paulo. But after a five-hour car journey to the city, Mateus and the three other men who travelled with him soon realise that the promise of “honest work and a contract” evaporated the moment that the reinforced metal gate to a metal junkyard slammed behind them. This impressive feature from Alexandre Moratto takes the topic of modern-day enslavement as a jumping-off point for a morality tale which gets increasingly knotty and satisfying as it goes on.

A sensitive and layered performance by Christian Malheiros

This assured second feature follows Brazilian-American director Moratto’s multi-award-winning debut, Socrates, and shares with that film a star, in Malheiros, and producers, in Ramin Bahrani and Fernando Meirelles. It was through Bahrani’s involvement that Netflix boarded the project; the streaming platform holds worldwide rights for 7 Prisoners and plans to launch the film in November, following a further screening at the Toronto Film Festival.

This is a work which starts a little shakily but builds in cumulative power to a wrenching climax. At first, it’s rather too much at pains to stress Mateus’ status as the ‘good son’ who chides his mother for buying him a new shirt (“It’s worth a month of groceries”) and promises to send home enough money to support the family. It’s Mateus who politely questions his new employer Mr Luca (Rodrigo Santoro, with a skeevy beard and a convincing edge of danger) about their rights as workers and the promise of three meals a day. And it’s Mateus who, having slogged for over a week in Mr Luca’s scrapyard for no pay, broaches the subject of the outstanding wages. Luca drops a bombshell – the men will have to work for free until they have paid off the debts unwittingly incurred from the journey to the city, the exorbitant rent and the cost of food. An attempt to escape ends with a visit from corrupt cops, who warn the men that their families will pay the cost of any further rebellion.

The men turn on each other – short-fused Isaque targets one of the other men, blaming him for the failure of the break out attempt. When Mateus approaches Luca with a proposal to increase the workload in return for an early release, his fellow prisoners start to eye him with suspicion. And it’s at this point that the film gets really interesting, both as a character study and a broader allegory.

Mateus tells himself that he is acting on behalf of the other men as he positions himself firmly at Luca’s side, but a Rubicon has been crossed. In Malheiros’ sensitive and layered performance we see the gradual realisation that his chance of freedom comes at a considerable cost, both to the other men and to his own principles.

Moratto’s filmmaking style has much in common with the empathetic naturalism of his mentor, Ramin Bahrani – he favours largely handheld camera and an understated score – but there are also moments of poetic symbolism. A throwaway comment from Luca about the copper wires that the men strip prompts a visual tangent which follows the snaking cables that link the people of the city and beyond – it’s a neat little jab of a reminder of just how much of the life we take for granted is dependent on turning a blind eye to the lamentable living conditions of the people at the bottom of the labour market.