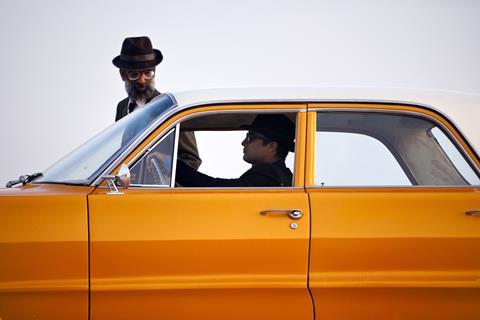 Occasionally a film comes along that is as impressive as it is baffling. Iranian director Mani Haghighi’s fifth feature A Dragon Arrives! is such: a meta-cinematic detective story set in 1960s Iran, shot through with counter-culture references and magical realism, channelling both the Westernised cool of the country’s pre-Revolution intelligentsia and the climate of fear and paranoia engendered by the Shah’s repressive regime.

At its core, this is (probably) a story about three men who go the remote, desertified Iranian island of Qeshm in 1965 to investigate the aftermath of the suicide of a political prisoner

The director deploys an array of post-modern cinematic tricks, from mockumentary-style interviews, to temporal leaps, cool costumes and set design (especially a flame-orange Chevrolet Impala), to a flamboyantly loud rock-influenced soundtrack by Christophe Rezai. The flash and panache of the style sometimes distracts us from storyline and ten different viewers are likely to have ten different opinions about what actually happened in this film. Whether this narrative obliquity will harm the film’s prospects of being seen by arthouse audiences outside of Iran remains to be seen. Certainly this is a good-looking package, more glamorously cinematic than anything Haghighi has made to date.

At its core, this is (probably) a story about three men who go the remote, desertified Iranian island of Qeshm in 1965 to investigate the aftermath of the suicide of a political prisoner. One, Babak Hafizi (Amir Jadidi) – a trilby-and-shade-sporting detective straight out of a Godard film – works as a detective for the Shah’s secret police, referred to as ‘The Agency’. But his mission here seems motivated by personal curiosity: spending the night in a rusted hulk of a ship that somehow got washed up in a desert valley, near a cemetery where earthquakes take place whenever anyone is buried, he brings two acquaintances to check out the seismic conundrum. One, Keyvan Haddad (Goudarzi) is a mystically-inclined sound engineer whose hippy hair and garb would have been precocious even in mid-sixties America. The other, Behnam Shokouhi (Ghanizadei), is a geologist who can identify rocks by tasting them.

Their story is told partly via flashback, in some visually stunning sequences shot both inside and outside the cemetery keeper’s ship-house in the ‘Valley of Stars’, a Middle Eastern folk tale fantasy location. Other sections are recounted after the event to Saeed Jahangiri (Safamanesh), an interrogator from Hafizi’s own department who has had the three men drugged and abducted.

But there’s also a subplot involving a shark-catching ophthalmologist and another centring on Haghighi’s own film-directing grandfather, Ebrahim Golestan, whose 1968 feature The Brick and the Mirror (clips from which are seen here) is often credited with launching Iranian New Wave cinema. Haghighi himself appears on camera in A Dragon Arrives! as an interviewee, discussing his grandfather and the mysterious casket that was discovered in his bedroom after his death, which links this thread – somewhat tenuously – to the Valley of Stars.

Questions of the shifting line between truth and fiction are just some of the issues raised by a restless, overloaded but never less than fascinating film which may or may not also be an allegory of contemporary Iran and the historical, cultural and religious fissures that run through its recent history – symbolised, perhaps, or perhaps not, by the crevasse-dwelling dragon that gives the film its name, who has the power to make men talk in foreign tongues.