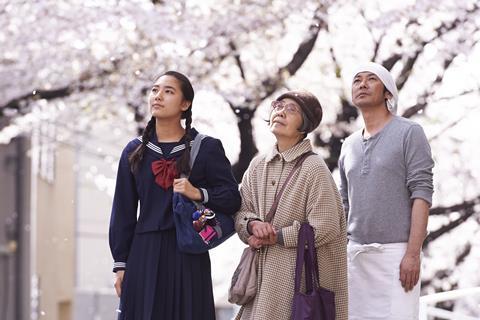 She may divide critical opinion, but Naomi Kawase’s fans will great An with open arms, appreciative of her slow pace, contemplative stances and her notion that one of the keys, if quite not to happiness, at least to contentment in life, is a full communion between man and nature.

The film’s best sequences by far are the early morning cooking sessions, with Tokue showing love, respect, attention and care for every single item she uses in every single phase of the preparation of the bean paste.

Others, while they may well appreciate the heartwarming performance of veteran actress Kirin Kiki in An’s lead role and the beauty of Kawase’s images in this Un Certain Regard opening film, will hold onto their reservations as the second half of the picture moves towards melodrama, diluting the script and leading to a predictably sweet, sad but ultimately cheerful ending.

Adapted from a novel whose title refers to the red bean paste used to fill a Japanese pastry known as dorayaki, most of the film takes place in and around a small bakery where the bitter Sentaro (Masatoshi Nagase) makes and sells dorayakis to high school students in the area. One day, the elderly Tokue (Kirin) stops by and asks to be taken on as his assistant. He hesitates but the taste of the bean paste she prepares, so vastly superior to anything he has eaten from the readymade factory cans he uses, lead to a rapid change of mind.

The film’s best sequences by far are the early morning cooking sessions, with Tokue showing love, respect, attention and care for every single item she uses in every single phase of the preparation of the bean paste. The actress turns these gentle, affectionate tutorials into a delightful experience, with Kawase’s camera underlining each stage of the procedure. But once these come to an end, and a second, unrelated issue – that of leprosy as a social stigma – is brought in, the clichés start to arrive in rapid succession. Even the most moving performances cannot disguise their obviousness, the most painful being the blunt, heavy-handed caricature of Sentaro’s female landlord. The segment involving a shy young student Wakana (Kyara Uchida) who has been badly neglected by her mother is never really worked into the fabric of the plot.

Issues such as loneliness in a big city, the vagaries of modern economics which are destroying private lives and unscrupulous social ostracism are mentioned along the way but never dealt with in any depth. Kawase, who has always relied on spectacular visuals rather than solid script treatment, seems to have had the aim of confronting three different generations in An, and allowing the older one to share her wisdom and experience with the younger two.

Screenplay: Naomi Kawase, based on An by Durian Sukegawa