‘And The Birds Rained Down’: San Sebastian Review 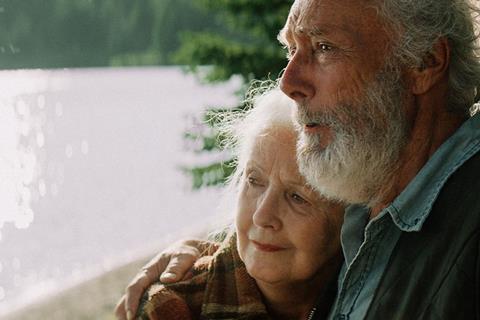 ‘And the Birds Rained Down’

French-Canadian director Louise Archambault’s feature homes in on a loose alternative family of oldies and drifters that forms near a remote lake in the backwoods of Quebec. A quiet, gentle film about emotional and geographic exile, this melancholic charmer is a choral character study whose slow pacing matches the unhurried lifestyle of its protagonists and the diurnal and seasonal rhythms of the nature they inhabit.

The film could qualify, on one reading, as the world’s most undemonstrative, chilled out apocalypse movie

Undoubtedly too slow for some, it may nevertheless stir some interest among older arthouse audiences, perhaps especially in French-speaking territories, as there’s a resonance to the film’s probing of lost and found love, age and displacement that raises it above the melodramatic backstories which underpin the narrative.

Archambault’s film pans out in a remote area of Quebecois conifer woods and lakes (it was filmed in and around the nature reserve of Montmorency Forest). In a beautifully-shot and -edited opening sequence we are gradually introduced to a trio of white-haired old men who live in cabins in the woods and bathe together in the lake. Ted (Kenneth Walsh) is a gruff, taciturn painter who traps rabbits in the woods for dinner, Tom (Remy Girard) is a guitar-strumming musician and singer with a drink problem, while the wary Charlie (Gilbert Sicotte) seems to be the unofficial headman of the group, and the one who, at first, most fiercely defends them from outsiders.

Only Steve (Eric Robidoux), a single thirty-something who owns a little-frequented hunting lodge hotel nearby, is allowed in to their woodland realm to deliver supplies.

Through Steve, two invaders arrive to disturb the fragile equilibrium. One is the aunt Steve never realised he had – Gertrude, a long-term, elderly inmate of a psychiatric institution, sensitively played by veteran Canadian actress Andree Lachapelle. The other is Raf (Eve Landry), a female photographer who has been charged by a local museum with the task of compiling testimonies of a ‘Great Fire’ that happened here at some unspecified time in the past, and taking portraits of the survivors.

On one level, And the Birds Rained Down (that’s what happened during the Great Fire, it seems) is a small bucolic drama-romance about a group of misfits who recreate a more caring society away from society. But it’s also about the importance of individual and collective memory, about whether we have a right to disappear or have a duty to bear witness.

It’s about nature and natural catastrophes too; in fact, the film could qualify, on one reading, as the world’s most undemonstrative, chilled out apocalypse movie. Misty widescreen treescapes and lake views act as line breaks between paragraphs of action, alongside a repeated sequence of fire tearing through a forest, seen from above, that turns out to be a work of video art. Still, if the script remains understated. We learn nothing at all about why Steve and Raf are single – if indeed they are. And a late revelation that Gertrude (who by this time is calling herself Marie) makes during a tender, geriatric love scene seems about to hurtle us into final-act schmaltz, but instead, simply rests with us as something to ponder.

It probably wasn’t necessary to subject us to two whole songs performed by Tom at different points, one a Leonard Cohen number and the other by Tom Waits. But that’s a rare indulgence, and the rest of the soundtrack, by Montreal folk rock band Will Driving West, fits in well with And the Birds Rained Down’s autumnal quietude, evident also in a sound design built around wind in the trees, the lapping of water, and the crackling of logs on campfires.

Screenplay: Louise Archambault, based on the novel by Jocelyne Saucier