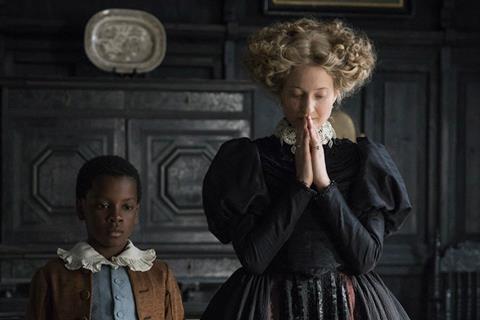 “Don’t be afraid. Evil lies behind you. You will set an example.” The words are spoken by an 18th-century comtesse (Alba Rohrwacher) to the African slave boy she has acquired with the intention of Europeanising him in the courts of the Hapsburg empire. But ‘evil’ is a slippery concept and something which is far more likely to be assigned elsewhere rather than recognised in the mirror. Markus Schleinzer’s supremely assured second feature is, in its own way, as profoundly uncomfortable as his 2011 debut, Michael; an account of five months in the life of a pedophile. Inspired by the life of Viennese ‘Court Moor’ Angelo Soliman, Angelo is a mesmerising portrait of a man of quiet dignity whose very humanity is denied by those around him.

Schleinzer, like his central character, uses silence as a tool and a weapon

Following the film’s premiere in Toronto, Angelo should enjoy a healthy festival career. This is accomplished filmmaking, which represents a unnerving, austere counterpoint to Amma Asante’s Belle; similarly inspired by a real-life collision between race and European aristocracy. But the elegance of this picture, the thing the elevates it to a genuinely arresting arthouse must-watch, comes with the unexpected, unshowy introduction of contemporary elements into two key scenes. Concrete and strip lights remove the comfortable distance afforded by all the draped brocade and burnished wood, compelling us to acknowledge the present day resonance of the story.

Angelo is not the first child to be chosen by the comtesse. She wrings her lace-sheathed hands in indecision before tentatively tapping a child’s shoulder. But this one is struck by a fever which claims his life. The repetition of the same process: the choice of child, the choir-sung hymn, baptism, underlines the fact that Angelo may be many things – a hobby for a bored widow, a court curiosity – but he is not considered to have an individual identity.

Told in three chapters, the film follows Angelo from a child whose proficiency with a recorder earns praise –  “Your first grand victory on the path to becoming human” –  to a young man and court performer (played by Makita Samba) and finally to old age (Jean-Baptiste Tiémélé) and the ultimate indignity in death.

As an actor, he is made complicit in the exotification of Africa – he weaves mannered tales of scorched rivers and burning mountains. He watches, impassive, as courtiers cavort in black face. But Angelo’s decision to secretly take a white woman as a wife draws a line under his time as a favoured member of the royal inner circle. He is ‘punished’ by being given his freedom. Angelo has been stripped of his history and identity; forced to assimilate and adopt the affectations of polite society, only to be told that he will never truly be part of that society.

Schleinzer, like his central character, uses silence as a tool and a weapon. Angelo realises that saying nothing is perhaps the only form of rebellion that he can afford to regularly exhibit. And Schleinzer allows scenes to run on, the painterly composition captured in long takes after the brittle court chatter has dried up. One scene is particularly striking: Angelo, in court finery, sits opposite another African man we assume to be a slave. Not a word is exchanged. Angelo’s posture seems to push the man, and everything he represents, as far away as possible. The grimly matter of fact approach to Angelo’s fate after his death doesn’t lessen the sickening shock of the reveal.