Opening Cannes, Leos Carax’s musical collaboration with the Mael brothers is ’an audacious folly that comes across as grandiose and joyless’ 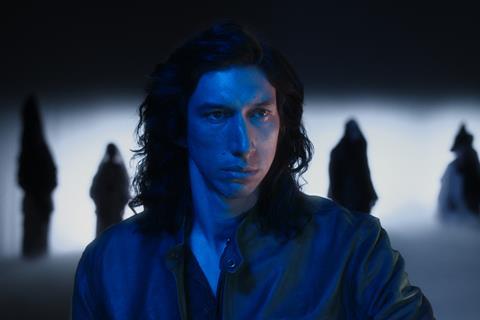 As Sparks, American brothers Ron and Russell Mael have tirelessly released eccentric, inventive pop records since the early 70s, while elusive French auteur Leos Carax has only made a handful of films. Despite their very different outputs and artistic approaches, both acts have an enigmatic aura that would make a collaboration an exotic prospect indeed. But their ambitious musical creation Annette – this year’s Cannes opening film - is an ungainly, frustrating affair. Carax’s 2012 comeback Holy Motors reaffirmed his cachet as an outré visionary, but his follow-up is an audacious folly that, despite the Maels’ renown for self-mocking irony, comes across as grandiose and joyless. Nevertheless, leads Adam Driver and Marion Cotillard, plus the Maels’ current visibility in Edgar Wright’s The Sparks Brothers, should give Carax’s first English-language venture some traction when it opens this autumn.

Given the Maels’ reputation for wit and mischief, it’s surprising that so much of their material here is so solemn

With music by the Maels and a script co-written by them and the director, Annette begins drolly enough, as a solemn voice asks for our complete attention, warning us not even to breathe while the film is on – nor even sing, laugh, yawn, boo or fart. Carax himself presides over a recording session, before he, his stars, the Maels and backing singers parade into the street in a long take, to upbeat overture ‘So May We Start’ – the jolliest moment in an otherwise surprisingly sombre affair.

Cotillard and Driver play lovers Ann Defrasnoux, a famous operatic soprano, and Henry McHenry, a stand-up comic who performs under the sobriquet ‘the Ape of God’. Wearing a green bathrobe, Henry specialises in an aggressive form of self-reflexive anti-comedy with music; he’s an up-and-coming success, although his cynical, audience-baiting style later draws angry responses. Ann meanwhile specialises in ‘singing and dying’, as Henry says – with a montage demonstrating that operatic heroines are almost invariably victims of male violence.

They have a baby, Annette. She’s played by a marionette, created and operated by Estelle Charlier and Romauld Collinet – an unsettling conceit worked seamlessly into a film that uses manifest theatrical-style illusion throughout, often quite poetically. But Henry – a Byronic soul prone to taking late night motorbike rides – increasingly loses control of his self-loathing psyche, with things coming to a head one dark and spectacularly stormy night at sea. The film then plunges deeper into the realm of supernaturally-inflected opera, as Annette displays uncanny powers - which Henry decides to exploit with the aid of a conductor (Simon Helberg), Ann’s former accompanist and lover.

There’s no shortage of ideas, whether in Carax’s extravagant, often epic mise en scène, or in the script, which juggles with ideas about toxic masculinity, the implicit violence of comedy, and artists’ relation to their (appreciative or hostile) audiences. There’s also overt commentary on the #MeToo era, as Henry is accused by six women of abuse – an episode abruptly introduced, then forgotten about.

Given the Maels’ reputation for wit and mischief, it’s surprising that so much of their material here is so solemn, the songs rarely getting to blossom to their full capacity. Still, there are flashes of melodic invention, while one early choral passage has a genuine eerie echo of Benjamin Britten, and Helberg has a choice number introducing his Accompanist character.

Overall, it’s an oddly paced film. Carax will sometimes stretch a scene longer than it merits – Henry’s agonistic stage act is wildly over-indulged, twice – while other sequences are hustled out of the way when they’ve barely had time to breathe, like a promisingly lurid montage of Henry’s desperate nightclubbing. Visually, though, this is an opulent confection, with Carax, designer Florian Sanson and DoP Caroline Champetier - both returning from Holy Motors, both pulling out all the stops - making varied and emphatic use of the deep green that was one of that film’s visual signatures.

As for the leads, Cotillard exudes a fragile, dreamy nervousness, and bursts of erotic rapture, in a disappointingly underdeveloped role, while Driver’s usual charm and warmth disappear in a character who’s too one-dimensionally a tortured soul in the grip of “the abyss… the dark abyss”. Anyone who marvelled at Driver’s rendition of Stephen Sondheim’s ‘Being Alive’ in Marriage Story is likely to be disappointed by his struggle to project much emotional power into his singing here – partly, perhaps, because the drama is so stylised and because these hyper-knowing songs may not be naturally conducive to an emotional charge. But the ultimate problem with this flamboyant, yet oddly oppressive-feeling film is Carax’s bleakly Romantic world view – even working with exuberant wits like the Maels, he’s unavoidably committed to the dark abyss himself.