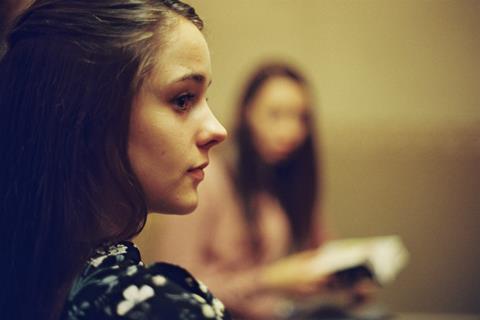 Little understood and often mocked, the Jehovah’s Witnesses have the spotlight turned on them in intimate British drama Apostasy – and what’s revealed is deeply troubled. Written and directed by Daniel Kokotajlo, himself a former Witness, this powerful feature debut occupies territory little charted in contemporary UK cinema, on the cusp between traditional social realism and a more European type of austere formal stylisation. Built around three intense, controlled female performances – from two young TV regulars and from Alan Clarke alumna Siobhan Finneran, so striking recently in BBC mini-series Happy Valley - this story of family in conflict with faith delivers an emotional payoff all the more telling for being so rigorously calibrated.

Severity in visuals and content, and an audacious storytelling approach, will make this a hard theatrical sell, but Apostasy should register internationally as one of those too rare films which fly the flag for a convincing British art cinema.

The Manchester-shot drama begins by introducing us to Alex (Molly Wright), just turned 18 and a member of a Jehovah’s Witnesses congregation; affected by anaemia from birth, she was given a blood transfusion as a baby, something that contradicts the church’s draconian rules on blood and the body. Alex, who is learning Urdu to convert local Muslims to the cause, lives with mother Ivana (Finneran), a devout believer, and sister Luisa (Sacha Parkinson), whose life at college is introducing her to feelings and possibilities outside the strict circle the girls have always known.

When Luisa announces that she is pregnant, the Elders of her community declare her “disfellowshipped”, barred from the faith, with her mother and sister forbidden to have contact with her. Meanwhile Alex is courted in shy, formal style by Steven (Robert Emms), a soft-spoken young Elder from London.

Two dramatic strategies make Apostasy particularly audacious – one is a sudden left turn that breaks with narrative convention (especially with the conventions of often hidebound British drama), the other is the device of having Alex narrate events and her thoughts not in voice-off but directly on screen, her commentary integrated into the action. The film, though shot in the kind of locales familiar from so much school-of-Loach drama, derives a fresh visual feel from Adam Scarth’s rigorously composed Academy ratio lensing, intensifying street scenes, claustrophobic interiors and intimate close-ups alike.

With a palette that emphasises browns and beiges to suggest a constrained, airless world, the film feels strikingly European in flavour: it’s close to two German dramas about young women and religious extremity, 2006’s Requiem (stylistically) and 2014’s Stations of the Cross (thematically). In domestic terms, its affinities are with that handful of directors that push UK realism towards its artistically challenging edges – e.g. Lawlor and Molloy (Helen) and Duane Hopkins (Better Things).

Wright and Parkinson play superbly against each other as two young women reacting differently to the same upbringing, one with cautious obedience, the other with a gradually welling defiance. As their mother, tested by the draconian demands of her belief, Finneran gives a performance all the more extraordinary because it is so restrained, at times on the verge of emotional inscrutability. So much hinges on her ability to make Ivana sympathetic when the character could easily come across as a fanatic – and Ivana’s reasonable-seeming invocation of her credo delivers all the more of an emotional wrench because of Finneran’s composure.

Robert Emms’s sympathetic but doctrinaire suitor offers strong support, as does James Quinn, as an elder whose avuncular manner only highlights the tyranny he represents.

Occasional solemn theological discussions are worked effectively into the drama. The only false note is the use of a too-obviously kitsch American voice-over on a Witnesses video; more effective is the interspersing of title cards with quotations from the faith’s scriptures. Kokotajlo’s own background gives an unmistakable ring of authenticity to a film that not only explores its individual drama in nuanced depth, but also offers broader insights into the hazards of unconditional religious convictions (and, by implication, political ones too).