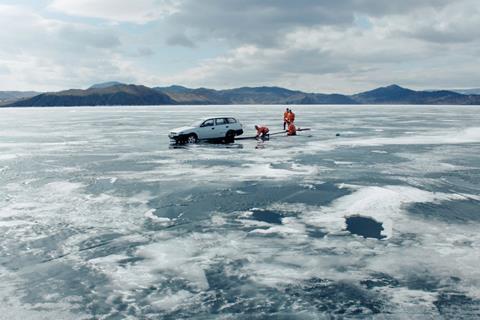 Any environmentalists and politicians arguing the need to combat climate change would do well to add Victor Kossakovsky’s Aquarela to their arsenal. The Russian filmmaker’s attempt to capture the raw power of the Earth’s water using 96 frames-per-second cinematography and considerable daring is an experience of shock and awe – as well as wonder – that all but Donald Trump should heed.

This is nature documentary at the form’s most elemental, its subject, star and dominant presence being water itself – not the creatures within it and only occasionally mankind. There is no narration, no context or caption; in fact, the film only loses its grip when people enter the frame. While feature-length visual poetry would be expected to have limited theatrical potential, the immense popularity of TV nature programmes such as The Blue Planet, the environmental subtext and the visceral cinematic experience Aquarela offers might prove otherwise.

Kossakovsky’s varied documentary output includes both the intimate and the epic, the latter best represented by ¡Vivan Las Antipodas!, whose thesis involved travelling to pairs of antipodean locations in Argentina and China, Russia and Chile, Spain and New Zealand, Hawaii and Botswana.

This new film is equally globe-trotting, yet more ambitious in both its subject’s unbridled nature, and the vividness with which it is shot. Arguably more interesting than the technicalities of achieving the atypical frame rate is the constant question of  how Kossakovsky, fellow cameraman Ben Bernhard and their colleagues filmed in some of their locations without getting themselves killed.

Aquarela starts in Russia’s vast frozen Lake Baikal, famous for the theatrically loud fissuring of its icy surface, where unexpected seasonal shifts are catching out drivers who suddenly plunge through the thinning ice. In Greenland, the effect of climate change is seen more spectacularly, as monumental cliffs of ice collapse into the sea and icebergs sink, rotate and rise to the surface; a dance of ice that is magnificent but also unnerving. A schooner glides past, dwarfed by the landscape.

In the Atlantic, the crew of the same schooner appear even more insignificant, and vulnerable, as they navigate a seemingly impossible route through mountainous seas. In Miami, the camera moves through the chaos caused by Hurricane Irma, at one point resting upon a flooded graveyard. The film ends at Venezuela’s Angel Falls, the world’s highest uninterrupted waterfall.

To date, faster frame rates have been most notably used in fiction: Peter Jackson’s The Hobbit trilogy, filmed at 48 frames per second, and Ang Lee’s Billy Lynn’s Long Halftime Walk, at 120. Those films met with decidedly mixed responses, the crystal-clear immediacy of the image somehow making the human stories less accessible. It works better here, with nature, and with image-making that often becomes abstract. For Kossakovsky the benefits are in the ability to capture vast scale with detail and vibrancy, and to shoot moving water without it blurring – allowing, say, the sheer immensity and force of the ocean to register.

Some of the watery and icy locales appear more beautiful, otherworldly and intimidating than anything concocted by CGI: a vast expanse of ice, glittering like diamonds; water breaking ethereally through a forest wall; ferocious Atlantic waves. At t night the calmer ocean takes on the smooth blackness of tar; underwater, the enormous expanse of hidden iceberg is smooth, gorgeously curved, alien.

The downside to the film is Kossakovsky’s feeling that he had to include people in the mix. While the opening sequence at the lake has a real, in-the-moment tragedy – meat and drink to a fly-on -the wall documentary – it feels out of place here, as do a group’s interminable fishing for sunken cars; elsewhere, the human presence is too marginal to be meaningful.

Likewise, whenever Eicca Toppinen’s soundtrack is at its most rock-bombastic, it feels intrusive; far better when we hear merely the crashing, cascading, rumbling or exploding of water and ice, nature providing its own best soundtrack.