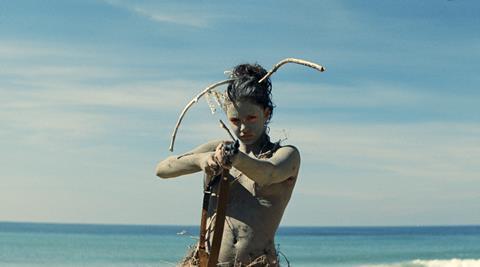 A thirteen-year-old girl fights back against her impending blindness with guns – literally – blazing in this insouciant tale of adolescent rebellion. But stylistic impact notwithstanding, the film is unbalanced by aimless plotting and queasy questions about the sexualisation of a vulnerable child protagonist. Although it’s the latest in the À Bout de Souffle ‘hail of bullets’ tradition of Gallic doomed romance, Ava bucks the trend by following a central character who is resolutely impenetrable and thus somewhat difficult to care about.

Conveniently for the story, the local police are surprisingly lackadaisical about vulnerable, partially-sighted minors brandishing guns

The first feature from Léa Mysius, who is the co-writer of Arnaud Desplechin’s Cannes opener Ismael’s Ghosts, the film has something of the lawless teen appeal of Gerardo Naranjo’s debut feature Voy A Explotar. And along with its arresting visual sense – the film is handsomely shot on 35mm – it can boast a robust resistance to the cinematic cliches of portrayal of disability. That said, the tonal inconsistencies and tricky moral terrain might make this a tough sell outside adventurous arthouse audiences and festivals.

Inscrutable Ava (Noée Abita) is on holiday with her flighty single mum (Laure Calamy) and her baby sister. Their beach time is interrupted by the latest in a series of regular appointments with an eye specialist to check on the progress of the condition, retinitis pigmentosa, which will eventually rob her of her sight. The news is not good. The doctor explains that the condition has progressed far more rapidly than expected and Ava will soon lose her night vision (plot device alert) before becoming completely blind.

Her bereft mother vows to make it a summer holiday to remember, something she hopes to achieve by booking Ava into some sand yachting classes and hooking up with an itinerant fast food vendor. But Ava has other ideas. Fascinated by a black German shepherd dog she encounters on the beach, she follows it, and witnesses its owner, a teenaged Roma boy, in an altercation with the waitress at a beachfront cafe. The police arrive, and the crowd disperses. But Ava becomes preoccupied by the dog and its owner, Juan (Juan Cano).

She steals the animal, and in one of the film’s most unlikely scenes, manages to conceal a rambunctious untrained dog in a cupboard overnight without her mother noticing.

On the run after a fight which ‘didn’t end well’, Juan sleeps rough on the beach; his few meagre possessions include a shotgun. Alerted that Juan might be in trouble, Ava braves the blackness of encroaching dusk to look for him. She finds him semi conscious and bleeding from a stab wound. Her abrasive relationship with her mother has deteriorated, and Ava flings herself into a relationship in which she can be carer rather than cared for.

A score featuring a brutalised cello brings a sense of menace; but off-key dance sequences to Europop hits are a tonal discord. Mysius seeds the film with black: the dog, the police horses and the circles that Ava paints on her bedroom wall all evoke both the fear of and fascination with her loss of sight. Less successful is the split screen sequence which sees a semi-naked, mud-daubed Ava embark on an armed mugging spree, accompanied by Juan, on the local nudist beach. Conveniently for the story, the local police are surprisingly lackadaisical about vulnerable, partially-sighted minors brandishing guns while in the company of wanted criminals.