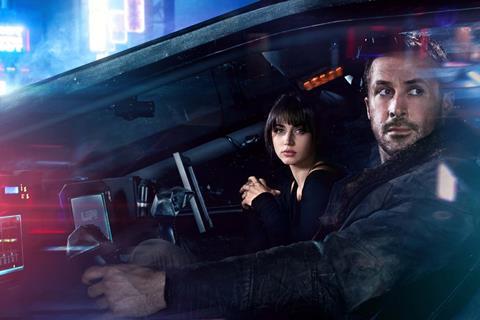 A ravishing visual colossus, Blade Runner 2049 more than lives up to its predecessor’s legacy as a groundbreaking mixture of sound, images and mood. This long-anticipated sequel’s screenplay sometimes struggles to keep pace, but director Denis Villeneuve has crafted an enrapturing sci-fi dystopia whose themes and emotions are so vividly realised cinematically that it hardly matters when the actual story isn’t quite as engaging. A superbly muted performance from Ryan Gosling grounds this solemn exploration of identity and what it means to be human.

Villeneuve pulls off that rarest of feats: conceiving a startling dystopia that never loses its ability to produce arresting images

Opening across most of the globe this week, Blade Runner 2049 will be a must-see for genre fans — not to mention lovers of gorgeous widescreen compositions. Gosling isn’t a sure-fire draw — although he’s coming off his biggest hit with La La Land — while co-star Harrison Ford has enjoyed a commercial renaissance thanks to The Force Awakens. The only lingering question is whether enough moviegoers desire a follow-up to a 35-year-old film — and whether Blade Runner 2049’s honouring of the original’s cerebral tone will be a turn-off for those craving wall-to-wall action.

Set 30 years after Blade Runner, 2049 follows K (Gosling), a Los Angeles Blade Runner who is assigned to eliminate runaway replicants: lifelike androids meant to serve humans. K is a more advanced model of replicant permitted to work alongside people while tracking down his own kind, an arrangement that makes him a pariah. (Humans are repulsed by him, while his fellow replicants consider him a traitor.) His latest mission leads him towards a potentially shattering discovery — proof that a female replicant managed to reproduce — and puts him on a collision course with Deckard (Ford), the former Blade Runner who went missing decades ago.

The original Blade Runner popularised several sci-fi tropes — the fear of a bleak future, the possibility that our technology could enslave us, the question of what constitutes consciousness — which have become genre commonplace. As a result, Blade Runner 2049 can’t help but sometimes feel like an echo — not just of its predecessor but also of film’s successors. (Plot points and scenes unconsciously reference everything from Her to Wall-E, which all harken back to the 1982 movie.)

But some thematic familiarity pales in comparison to Villeneuve’s astoundingly imaginative depiction of a devastated Southern California in 2049. Working with cinematographer Roger A. Deakins and production designer Dennis Gassner, Villeneuve pulls off that rarest of feats: conceiving a startling dystopia that never loses its ability to produce arresting images. Blade Runner 2049 moves across several different locations — everything from a densely populated Los Angeles to desert terrain to an abandoned nightclub — which helps keep visual monotony at bay. Without belabouring its points, the film speaks to issues of isolation, conformity, loss and heroism entirely through Villeneuve’s striking compositions, which forgo the noir-ish elements of Ridley Scott’s 1982 film but preserve the original’s icy despair.

Gosling marshals the same melancholy stillness he utilised as the stoic loner in Drive, although K’s emotional journey in Blade Runner 2049 is far trickier and, ultimately, more bittersweet. Audiences have seen plenty of robot characters who struggle to locate their souls, but Gosling conveys K’s internal turmoil with the sparest of movements, suggesting a replicant only slowly coming to grips with his humanity. He’s well paired with Ana de Armas, who plays a computer-simulation girlfriend who, like K, is limited by her programming and a slave to her masters.

Like the original, Blade Runner 2049 is largely a detective story, focusing more on reveals and twists than huge action sequences. With a running time close to three hours, the movie makes room for digressions and side characters, happily taking major narrative risks in pursuit of delivering a bold, provocative blockbuster that’s more sombre than its frenetic peers.

Those risks don’t always work, especially in the casting. On one hand, Sylvia Hoeks deftly plays a replicant assassin who is the film’s steely, athletic villain. But less impressive is Jared Leto as the cartoonish, guru-like head of a powerful corporation. As for Ford, he lacks the hardboiled edge he brought to the first film. But in its place is a rugged vulnerability that hints at the anguish that awaited Deckard after the first film’s enigmatic ending. Blade Runner 2049’s finale is slightly less cryptic, but it’s gut-wrenching in its own way.

Screenplay: Hampton Fancher and Michael Green, story by Hampton Fancher, based on characters from the novel Do Androids Dream Of Electric Sheep? by Philip K. Dick