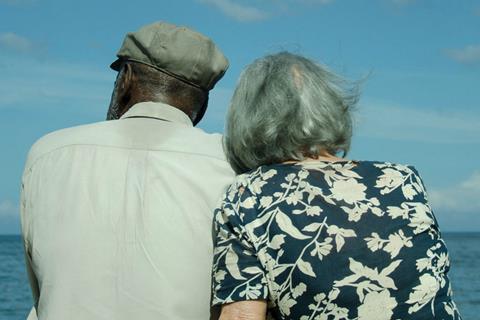 Havana, 1994. And at the height of the privations of Cuba’s ‘special period’, Candelaria (Veronica Lynn) and Victor Hugo (Alden Knight) are more focused on finding enough to eat and preserving their one remaining lightbulb than they are on each other. Although well into their seventies, the couple still toil every day for a pittance; Victor Hugo in a cigar factory, Candelaria in a hotel laundry and singing mournful laments in a jazz bar by night. Their lives change unexpectedly, and somewhat improbably, when Candelaria finds a video camera caught up in the bedclothes of one of the hotel rooms.

Production values are rough and ready, with the tobacco-hued interior shots faring better than the sun scorched exteriors

The premiere of this well-meaning but naïve drama from Colombian director Jhonny Hendrix Hinestroza (Chocó) in the Venice Days section of the Venice Film Festival should signal the beginning of a festival run. Interest will mostly driven by the relative scarcity of both films from Cuba and films featuring elderly protagonists. Theatrical prospects are likely to be limited by the picture’s slight story and mannered performances, which are at odds with the unvarnished naturalism of the filmmaking.

The couple share their apartment with stolen chicks that Candelaria cossets like children, rather than the future meals they are intended to be. Damp has stained the walls with an algal bloom that looks like flowers; Victor Hugo’s spasming cough turns every breath into a battle. And at a joint hospital meeting, the doctor chides them for losing weight; a result of the ‘forced diet’ that has been inflicted on everyone in the country.

The video camera, conveniently introduced into the plot at a moment when everyone else has left the laundry for an impromptu street protest, is initially a item of discord. Should they return it? Or sell it? But then Victor Hugo points it at his wife, and he starts to see her – actually look at her – in a way that he hasn’t done in years. For her part, Candelaria flirts with the lens, and by extension her husband, teasing him with saucy displays of shoulder and thigh. Their reinvigorated love life is caught on camera too.

The awkwardness of the subsequent scenes comes not from the age of the two actors, but from the fact that they simply don’t convince as a long-married couple. There’s an archness to the acting which is not helped by the decision to have them talk directly to camera in a couple of key exchanges.

Production values are rough and ready, with the tobacco-hued interior shots faring better than the sun scorched exteriors. Music – entirely ambient rather than an added score – adds a laid back charm to a film which doesn’t wholly convince, particularly as a portrait of Cuba in one of the most troubled periods of its recent history.