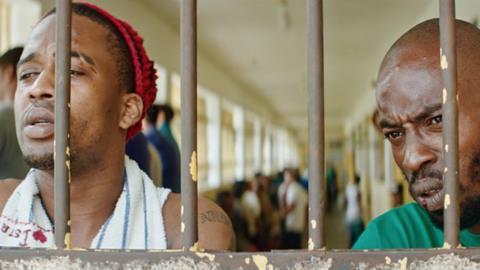 Drawing upon the actions of real-life detainees in the Dominican Republic’s Najayo prison, Carpinteros (Woodpeckers) finds a new angle within a crowded genre, charting the amorous communications between male inmates and their female counterparts. Within the film, the hope these snatches of conversation spark — conveyed via a form of sign language specific to the jail — helps alleviate the harrowing ordeal that is incarcerated life. For fifth-time filmmaker writer/director/editor Jose Maria Cabral (2013 foreign-language Academy Award submission Jaque Mate), it provides an opportunity to balance involving visual storytelling with an immersive emotional arc.

Portrayals seethe with the requisite immediacy in a feature that might not always surprise in its story, but succeeds in its authenticity.

There’s hypnotic beauty in watching limbs flail with passion to convey secret messages through bars and fences, just as there’s narrative ingenuity and urgency in steeping a romance so strongly its setting and its inherent limitations. Still, as fresh and engaging as Carpinteros’ premise feels during its first half — shedding light on an otherwise uncharted aspect of imprisonment — it can’t always shake the slightness of its love triangle focus, or its predictable path.

Carpinteros, which translates as Woodpeckers, takes its name from the prison term for men who spend their days sending missives of romance through the bars of the facility to a contingent of Najayo’s women next door. Their flurry of gestures is branded “pecker-talking” by the eager recipients awaiting every flick of the fingers — and it’s a realm and a pastime Julian (Jean Jean) stumbles into accidentally.

A new arrival who has bartered his way to a more comfortable place to sleep, he finds himself positioned near the hand-waving cohort, but sparks trouble when he starts chatting with Yanelly (Judith Rodríguez Perez), the girlfriend of the aggressive Manaury (Ramón Emilio Candelario). Guards swiftly descend upon the scene, the window that provides the woodpeckers’ vantage point is swiftly boarded up and Manaury is moved, though not before he can enlist Julian to act as his messenger.

Every woodpecker has his own signal with his own girl, Julian is told; however, as he memorises Manaury and Yanelly’s code, he begins to warm to his conversation partner. “You’ll soon realise that if enough time is spent doing this, you will learn to sense my touch and my embrace,” Yanelly tells him with a warm smile. It’s not difficult to foresee that her words will prove accurate, or that the many obstacles between them — Manaury’s violent jealousy, Yanelly’s own paranoia and mistrust, and the routines and rules of their respective institutions, specifically — will prove formidable.

Romeo and Juliet might have had to face comparable setbacks, but these would-be lovers share something else with the benchmark for forbidden romance: the vividness of their connection, as brought to the screen in naturalistic yet woozy style by Cabral’s regular director of photography Hernán Herrera. Mirroring the film’s storyline, he finds glimmers of brightness within the bleakness, whether watching the woodpeckers peer across the sunny courtyard, crawling through grimy hallways or letting the glowing light seep through in an intimate moment.

Further liveliness stems from the three leads, though it’s the soulful Jean and feisty Perez who are given the most scope to leave a lingering imprint, leaving Candelario to play thuggish and bitter. Still, as the film’s only three professional actors — courtesy of shooting on location at La Victoria prison, a facility named in Carpinteros as “hell on earth” and depicted as such — against a supporting cast of real inmates, their portrayals seethe with the requisite immediacy in a feature that might not always surprise in its story, but succeeds in its authenticity.