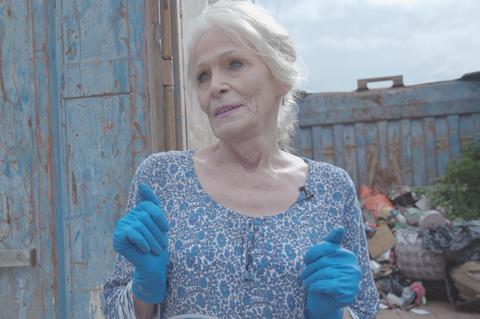 Australian director Lachlan McLeod (Big In Japan) washes two interesting subjects through his documentary Clean. The first is the concept of a specialist trauma cleaning service and the people who work for it. You might imagine such a facility would be an offshoot of local law enforcement, or government sanitation services  — but not in Melbourne, where the work is mostly subcontracted to Sandra Pankhurst’s privately-run outfit. Sandra herself is the second – and probably the most compelling – focus of McLeod’s film.

They don’t make them like Sandra any more. A unique and impressive personality (and a reminder of her fellow Australian Dawn O’Donnell, the subject of 2015’s Croc-A-Dyke Dundee), she is both worryingly frail and take-no-prisoners blunt from the moment she sits down in front of McLeod’s camera in February 2019. It’s her trajectory which will move viewers to tears. The two topics do split apart, however, and Clean bounces off the nitty gritty of both  – the toll of the gore and the grime of Sandra’s job or the woman herself, and the full depth of her unusual history.

Sandra is trans, which should garner Clean an added audience on the LGBT circuit outside the festival and streaming attention it will automatically attract. Her gender is less of a factor in the film, though, than her sad and extravagant past, and how it led her to cleaning up other peoples’ messes for a living (or, as she says, taking on ‘all the shitty jobs nobody wants to do’). Her empathy comes to the fore in surprising ways for such a tough-talking old broad: her heart is almost visible on her sleeve.

She also has a terminal lung condition as a result of not wearing PPE during the early days of the company which she started 30 years ago. This means she can’t attend jobs any more, leaving McLeod with the problem of having to split her apart from the business. As she tells him: “When I get sick, I can go down like a sack of shit.” You’ve got to respect that. She’s clearly so frail — can she make her way to a happy ending? She has already written one memoir, and plans to use her remaining time to write  another (when she’s not watching a live CCTV feed of her business from the hospital bed, that is). As she turns up for a seminar, she tells her interviewer confidentially: “I’ve just found out I have a brain tumour, and we could be a bit salacious about that, because I want to do another book.” Sandra is a hustler as well.

Meanwhile, back in the business, her staff go about their jobs. As she points out, they’ve all suffered in life, like her. It means they tend not to judge people who can’t look after themselves, as they move from cleaning out Devon’s filthy, needle-filled drug squat, to a level 9 hoarding job (it’s as bad as it sounds), to almost performing social work as cleaners for people who aren’t coping well for various reasons. “Bad things happen all the time,” says Sandra matter-of-factly. “People die in horrific ways every day.”

McLeod clearly hasn’t been helped by the strictures of the pandemic in his narrative through-line, and the decision to add recreations of post-suicide detritus is a let down for a cast of characters who are so determinedly real. But when Sandra opens up about her past, her failures as a father, her hormone treatment and surgery — she had a 48-inch bust at one point in her life - and days as a drug-addicted prostitute on the streets of St Kilda, the audience begins to understand where she comes from, and it’s such a genuine place that it’s hard to quibble with a few documentarian’s tricks.

Clean is not a complete film. But life, as Sandra well knows, is such a messy thing. It’s certainly a tribute to her.