‘Dance With Me’: Macao Review 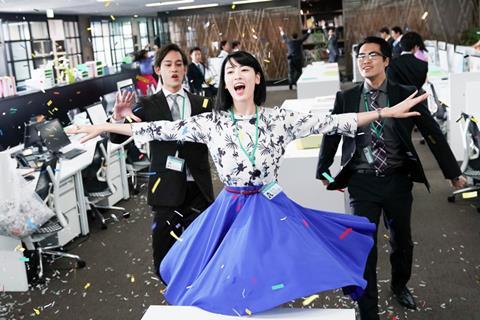 Shizuka (Ayaka Miyoshi) is not a fan of musicals. “People singing out of the blue,” she scoffs. “It’s like they are mentally unstable.” But, thanks to a botched hypnosis session, Shizuka soon finds herself compelled to sing and dance whenever she hears music, transformed from a sleek, go-getting career woman into the glassily grinning star of her own imaginary show-stopping performance. This cheerfully lightweight comedy gets a fair amount of mileage out of its single comic device but, after a promising opening sequence in which Shizuka’s trance-induced vamping wrecks a restaurant and possibly her career, the film settles into a flat-footed buddy road movie crossed with Karaoke on wheels.

There’s a sense that, for all the song and dance, this film is a little too self-conscious about the fact that it’s a musical

Following the break out success of Waterboys (the tale of a schoolboy synchronised swimming team spawned a spin-off television series) in 2001, writer/director Shinobu Yaguchi has made a career out of crowd-pleasing underdog comedies. Dance With Me proved popular when it released in Japan in August but, despite the presence of veteran Godzilla star Akira Takarada, the film’s overseas reach will likely be limited by the fact that, for all the meta potential of this ‘anti-musical musical’, Yaguchi plays it all rather straight.

Like most of the other young women at the prestigious company where she works, Shizuka is nursing a crush on adorable junior executive Murakami (Takahiro Miura). Unlike most of the other women, she recognises that his ‘grateful’ expression, deployed to charm people into doing his bidding, is a bit calculated or studied. Even so, she finds herself toiling over the weekend to put together a presentation for him. Work completed, she takes her niece to a down-market amusement park where she encounters former celebrity hypnotist Martin Ueda (Akira Takarada). Ueda offers to hypnotise her niece to banish her stage fright. But the hypnotic suggestion affects Shizuka as collateral damage, a fact which becomes mortifyingly clear during the business meeting at which Murakami presents her work.

Shizuka’s compulsion to sing and dance may leave a trail of devastation worthy of a mid-sized hurricane but, as a narrative device, it runs out of power fairly quickly. Yaguchi adds fresh blood to the story in the shape of ebullient Chai (Yu Yashiro), Ueda’s former assistant, who joins Shizuka on a cross-country journey to track down the hypnotist. Along the way, they dance their way out of a gang war and temporarily join forces with a jilted busker armed with a grudge and a cake knife (a memorable cameo from singer Chay).

The musical numbers come thick and fast. The laughs, not so much. The reliance on pratfalls and exaggerated reaction shots as a comedic shorthand works up to a point – Miyoshi is an appealing screen presence, if not a particularly versatile one. But Yaguchi repeatedly pulls back, wary of too much absurdity. And that’s the key problem here: there’s a sense that, for all the song and dance, this film is a little too self-conscious about the fact that it’s a musical.