Russian experiment which can be an uncompromisingly confrontational watch 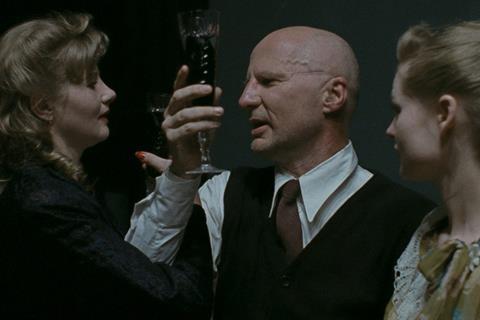 Long before its first exposure in a film festival context, Ilya Khrzhanovsky’s DAU project had already attained legendary status. Shot over two years and edited over six, this meeting of cinema and conceptual art involved the building of a vast set that recreated the conditions of a Stalin-era USSR scientific research centre, where the film’s crew and non-professional cast lived in historically authentic conditions as if actually inhabiting the film’s fictional world. The venture’s Kubrickian ambition and meticulousness were all the more remarkable given that its instigator was a director who had only made one previous feature, and a somewhat esoteric one, 2005’s 4. The gilt started to come off the legend, however, when a vast DAU installation opened last year in Paris to a somewhat cool reception – partly because the several feature films shown didn’t quite live up to the spectacular promise of the on-set stills.

A puzzling, inconclusive drama that doesn’t quite hold its own outside the parameters of the overall project

Now standalone episode DAU: Natasha plays in the Berlin competition (with the six-hour DAU: Degeneration series to follow in Berlinale Special). The credited co-writer/co-director is Yekaterina Oertel, also responsible for hair and make-up, who is one of the DAU project’s several so-called ‘editing directors’, responsible for collating material drawing on specific themes (in her case, relating to women). Natasha certainly proves that Khrzhanovsky is a risk-taker, and his actors even more so. But it’s a puzzling, inconclusive drama that doesn’t quite hold its own outside the parameters of the overall project, with little background information given – such as dates, although we’re in the early 50s - to suggest how Natasha might relate, narratively or thematically, to the bigger picture.

The action, shot in studiedly murky tones on 35mm, starts in the facility’s canteen, run by two women – mature, world-weary Natasha (Natasha Berezhnaya) and younger, wilful, rebellious Olga (Olga Shkabarnya). The two women have a surrogate mother-daughter relationship, very much love-hate, with at times a borderline-erotic intimacy; the first extended canteen sequence comes to a head with them having an argument, working up to a physical scuffle, about Olga’s refusal to tidy up.

We then see resident scientist Dr Blinov (played by the late Alexei Blinov, in real life an electronics engineer and artist) working with visiting French scientist Luc Bigé (Luc Bigé, a biochemist) on Wilhelm Reich-style ‘orgone box’ experiments intended to enhance the physical powers of Soviet soldiers. Olga then hosts a bacchanalian evening at her quarters; the two women get drunk with the scientists and soldiers, after which Natasha and Luc have a bout of graphic (and, as far as one can tell, real) sex. Back in the canteen, Olga again hits the bottle – and the emotional high registers - before Natasha is called in for a meeting with the site’s head of security Vladimir Azhippo (Vladimir Azhippo), who subjects her to a brutal ritual of sexualised humiliation, apparently because she has broken protocol by sleeping with a foreigner.

The extended interrogation sequence – which requires considerable fortitude from Berezhnaya – will be enough to attract controversy, and it makes for an uncompromisingly confrontational watch. But many viewers may feel wiped out before they reach this point, as the long sequences of boozing, brawling and shagging that precede it are in themselves fairly gruelling to get through.

Shot with nervy hand-held cameras, the unbridled, spontaneous-seeming scenes have an emotional rawness that - coupled with the drab, functional interiors - suggest Cassavetes-style psychodrama staged in a severe art-lab environment. The claustrophobic enclosure is all the more surprising given that there are only two exteriors in the entire film, both nocturnal, making you wonder if any of the other episodes make full use of the vast citadel-like construction that is one of DAU’s prime claims to notoriety.

The casting is extraordinary – not only because everyone we see genuinely might have emerged from 1950s Soviet Russia, but also because they all let rip, dropping their defences, in a way that professional actors might have drawn the line at. The charismatic, controlled Berezhnaya in particular deserves an acting award partly on the grounds of sheer courage and endurance. As for the merit of Natasha as a stand-alone episode, that is moot: without any clear sense of a context that might let viewers understand what world we are in, who these people are and how they got here, the drama itself feels like a sketchy, somewhat unstructured fragment.

Regarding any new insights into individuals’ private and political lives under Stalin, Natasha contains little that’s new beyond the sexual component, largely relying on the background knowledge that viewers may themselves bring to the film. DAU: Natasha may leave viewers shaken, but also mystified and frustrated, and overall offers no clear evidence that any of the dramatic material Khrzhanovsky has shot could hope to compete with DAU: The Making of… - which will surely be a mind-boggling and revelatory watch, if we ever get to see such a film.