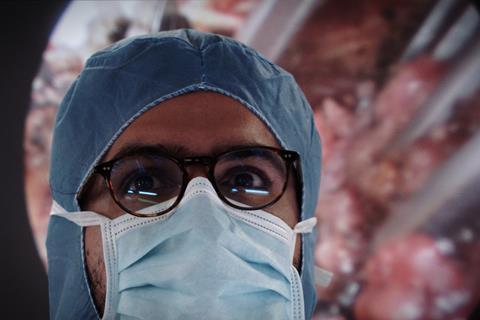 Documentary De Humani Corporis Fabrica covers human life from the cradle to the grave – and delves fearlessly into the icky bits in between. Verena Paravel and Lucien Castaing-Taylor have given their study of the medical profession, and medical processes, a Latin title that translates as the ‘technique’ or the ‘art’ of the human body, but also suggests that hospitals are essentially factories or workshops for tending to that delicate, complex instrument.

Sensitive viewers beware, some of the deep-diving material – including eye surgery and some very intensive treatment of a man’s penis – is wince-inducing to say the least.

Filmed in eight French hospitals, this is a typically audacious undertaking for the duo, mainstays of the Harvard Sensory Ethnographic Laboratory, taking a similar immersive approach to their material as in previous works such as Leviathan and Somniloquies. Sensitive viewers beware, some of the deep-diving material – including eye surgery and some very intensive treatment of a man’s penis – is wince-inducing to say the least. But fearless, often revelatory execution should make this a serious proposition for brave exhibitors and fests with similarly steely-nerved audiences.

Using cameras – including new ‘lipstick’-style cams specially constructed by the Andromeda company – Paravel and Castaing-Taylor apply their restless, exploratory style to every corner of their material, both inside and outside the body. At the start, a camera follows a security guard through a hospital’s sub-basement corridors, which prefigures the later journeys through the tunnels of the body. We then hear medical staff talking off-screen about increasingly difficult work conditions in budget-challenged times; this sequence is shown in murky darkness, and it’s something of an irony that some things you want to see are fuzzily shot while others you’d perhaps prefer not to see are shown in crystalline detail.

Some of the more mercilessly candid sequences include an eye op; that penis procedure, using some kind of pump (surgeons speculate on whether to go for the ‘ballistic setting’ or the ‘Kalashnikov setting’); and an operation in which metallic prongs and tweezers dig about in a well of bloody matter, which turns out to be the prostate. Tough watching as such images are, they are offset by others of a remarkable beauty – including still images resembling gorgeous psychedelic swirls, on which doctors search for signs of cancer. A caesarean op is unnerving at first, then gasp-inducing as a small, healthy but thoroughly aggrieved baby emerges.

Other hospital scenes are effective, but not immediately easy to relate to the overall design. Several scenes in a geriatric ward include two elderly ladies taking an extended, laborious ramble up a corridor, and a troubled, insistently chattering man. In these sequences, an offscreen sound like a repeated peacock’s cry turns out to be an old woman in her room. This, like the image of a corpse being unceremoniously dressed by morgue attendants, arguably lays the film open to charges of intrusiveness and, whatever precautions and permissions were involved, they inevitably make the viewer uneasy.

A chat between members of the medical teams makes it very clear what gruelling conditions they’re working under. It’s perhaps not encouraging to hear one clearly ultra-capable surgeon talking irritatedly about how overwork is fraying his nerves and how he might have to try yoga. The film ends, perhaps mercifully, on an upbeat note, at a leaving party for one medic – followed by a blurrily shot staff disco, as the camera maps out a bizarre, Bosch-like mural that shows medics’ humour at its most outré.

Pretty much everything included is fascinating, but where the film perplexes is in its selection criteria – why so much from the geriatric ward, as opposed to other things that might have been shown? The film-makers clearly want to provide a wider view of medical life than just extreme close-ups of slicing, scouring and sluicing, but the film, at two hours, can’t possibly attain the expansive scope of, say, a Frederick Wiseman study, and a certain resulting randomness can be frustrating. But then again, Paravel and Castaing-Taylor’s aesthetic is the diametrical opposite of Wiseman’s detachment – they specialise in digging deep, perhaps deeper than you may feel comfortable with. Some cinema hits you in the gut – this film places you right inside the gut, and while it’s not always a pleasant place to be, it’s a visit you’re not likely to forget.