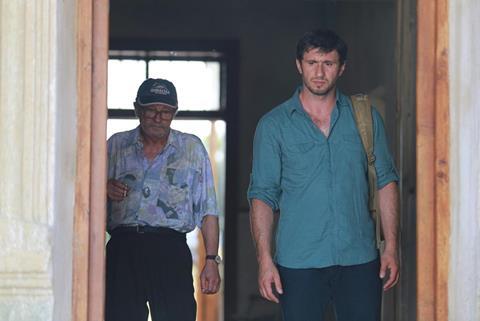 In Dogs (Caini), inheriting 550 hectares of apparent wasteland in the Romanian countryside near the border with Ukraine proves problematic for the young man whose late grandfather acquired it back in 1983. Writer-director Bogdan Mirica makes a very assured feature debut, juggling an accretion of sinister clues and slow-burn allegiances at a low-key pace kept humming thanks to attention-getting widescreen panache.

Tension seems melded at a molecular level with the oppressive heat

A fine entry in the tradition of advising city-slickers-who-won’t-listen to go back where they came from, this fable of lawlessness, percolating menace and foolish disregard for atavistic local traditions is enjoyable viewing for art house patrons who don’t mind the occasional snippet of harsh narratively-motivated gore.

The film’s tone is expertly established in an unsettling opening shot as the patiently probing, gliding camera hovers close to the ground over scrub grass and dirt to a scummy pond where something distasteful bubbles to the surface.

Roman (Dragos Bucur) has come from Bucharest to see his grandfather’s spread where the soil is so unproductive that “even the Commies couldn’t plant their collective farms here.” An elderly caretaker shows Roman his vast new domain complete with a hostile dog named ‘Police’.  Roman intends to sell the property and enlists a young notary to broker the deal.

Ailing but still wily Police chief Hogas (Gheorghe Visu) soon informs Roman that the notary has vanished. It would seem that parties unknown object to any change in the status quo.

The two-man police station’s forensics lab is Hogas’ patio table where, in a superbly shot, queasy-making sequence, he painstakingly removes something unnerving from a leather boot, presumably the object that popped to the surface at the outset.

The laconic characters don’t say much most of the time but when they do speak, it’s worth paying attention. Tension seems melded at a molecular level with the oppressive heat. The police chief hopes to get useful information from a so-far tight-lipped informant who works for a certain Samir (Vlad Ivanov), who answered to Roman’s late grandfather.  Anyone who’s ever seen a Mafia-inflected movie knows that Roman should probably get out while the getting’s good.

But Roman has a stubborn belief in civilization and the rule of law. Cue sardonic laughter.