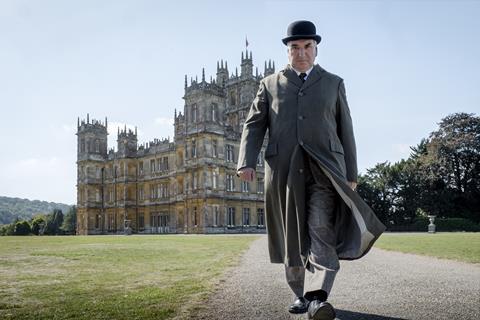 Fans of the enduringly popular ITV period drama series will no doubt embrace this feature film spin-off, which represents a step up in lavish visual spectacle while retaining a comforting familiarity of themes and storytelling style. The picture uses the occasion of a Royal Visit to Downton Abbey to embark on a whistle-stop tour through the lives of the key characters. There’s a lot of ground to cover and the picture’s oddly episodic structure feels rather scattershot at times. Still, there’s no question that the picture delivers exactly what viewers have come to expect: fabulous costumes; upstairs-downstairs intrigue and Maggie Smith crisply doling out extravagantly spiteful one-liners while wearing a hat the size of the Home Counties.

There’s a sense of ends being tied up, of this being perhaps a final chapter

While Downton Abbey will probably not woo new fans, those who loyally watched the six series of the television show are unlikely to want to miss out on the latest instalment of the Crawley family’s lives and loves, particularly as there’s a sense of ends being tied up, of this being perhaps a final chapter. The picture should do healthy numbers worldwide, even in China where the TV series proved an unexpected hit, but should be best received in the UK and US, particularly by demographics with an appetite for escapism, conservatism and nostalgia.

A slick opening sequence, which follows a letter from the desk of the royal emissary on its journey by rail, road and silver tray to Downton Abbey, allows the production to flex the bulked-up budgetary muscle afforded a feature film. The letter announces that Downton will play host to the King and Queen for a single night during a royal tour of Yorkshire. Lady Mary (Michelle Dockery) temporarily sidelines the question of mending the roof to focus on the task of overseeing the arrangements. But it’s below stairs – the flailing feet under the gliding swan – that the organisational burden is shouldered. The redoubtable former butler Mr Carson (Jim Carter) is tempted out of retirement, much to the annoyance of current butler Thomas Barrow (Robert James-Collier). Temporarily relieved of his duties, Thomas is free to pursue the kind of extra-curricular activities which tend to land a young man of his persuasions in hot water.

Meanwhile, a smouldering family feud reignites between Lady Violet Crawley (Smith) and her estranged cousin Maud Bagshaw (Imelda Staunton), lady-in-waiting to the Queen. And the Downton staff take umbrage when their counterparts from the royal household – including “the King’s Page Of The Back Stairs”, aka a butler with bells on – waft into the house and take over its running.

Although visually, Downton expands to more than fill the big screen – the production design and location choices are first-rate, sweeping helicopter and drone shots abound – the writing seems to still be rooted in television. Rather than three acts, the drama plays out in a series of mini-climaxes, as if structured around advertisement breaks. It’s certainly a bold decision to casually throw away an assassination plot on the King as an early narrative aside, but it does mean that the film’s dramatic climax – an opulent Royal ball – lacks much in the way of surprises. But then perhaps that’s the appeal of Downton Abbey. The sense of constancy, of a state of being which has its foundations in centuries of history: it’s a solid, oak-built world in which a Royal visit is little more than a future anecdote to be deployed between hands of bridge.