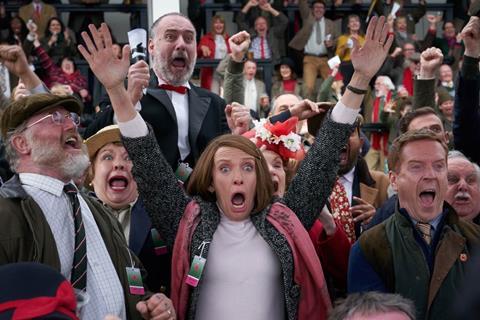 Toni Collette is a sure thing in Dream Horse, a thoroughly predictable but ultimately winning underdog sports movie. Based on the true story of a group of down-on-their-luck Welsh villagers who pool their assets to sponsor a racehorse, the movie goes a long way on the strength of the Oscar-nominated actress’s emotional performance as an unfulfilled wife and mother who decides to bet on herself. Director Euros Lyn overdoes the feel-good trappings, but it’s hard to deny the genuine sentiment that the movie stirs up.

The movie’s got spirit and finishes strong

This Sundance premiere will appeal to general audiences who just want a little uplift from their movies when it opens in the UK on April 17 and in the US in May. Collette fans will be pleased as well, and horse lovers should be charmed by the title character’s soulful eyes and knack for coming up big during the story’s most critical moments.

Set in the economically depressed Welsh community of Cefn Fforest, Dream Horse stars Collette as Jan Vokes, who works at a co-op and a bar to make ends meet. (Her husband Brian, played by Owen Teale, is out of work because of crippling arthritis.) With their kids grown, Jan (who’s always adored animals) is having trouble coping as an empty-nester — which partly explains her interest in supporting a racehorse, which might be a financial windfall and, more importantly, a way to add meaning to what she feels is a pretty humdrum life.

This real-life tale was previously the subject of the 2015 Sundance documentary Dark Horse, and there’s no mystery to why the material would lend itself to a likeable feature film. Recalling indie hits such as The Full Monty, Dream Horse is principally a salute to small-town characters who take a chance, in the process finding personal satisfaction. The movie’s target audience will want to believe that these downtrodden people can beat the odds, and Dream Horse does nothing to upset those expectations.

To raise the money, Jan and Brian start up a syndicate that includes other locals — notably, a tax advisor named Howard (Damian Lewis) who has experience with racehorses. Dream Horse soon brings together a cadre of colourful supporting players, although the movie is principally focused on Jan, Brian and Howard, who all look at their horse, whom they christen Dream Alliance, as a symbol of hope for a village that hasn’t known much optimism in a long time.

Lyn (who directed the miniseries Kin) keeps the story moving along briskly, adhering to each familiar plot point with enthusiasm and heart. Dream Horse is far too cutesy when it comes to the syndicate’s one-note supporting players, but Collette makes Jan far more nuanced than might be expected. Screenwriter Neil McKay deftly explores how Jan views this racehorse as not just a friend but also in some ways a child; she’s getting the chance to be a nurturing mother again now that her kids are adults. Jan’s bond with Dream Alliance is touching but also bittersweet — by fixating on the horse’s performance on the track, Jan is distracting herself from the unhappiness she feels in a moribund marriage.

Lewis and Teale similarly do a lot with characters who are a bit banal. Howard was never more content than when he spent time backing horses — even though his previous investments nearly forced his family to lose their home — and Lewis gives us a man who’s dead inside due to a soul-killing job. Likewise, Teale brings tenderness to his portrayal of Brian, a defeated husband who reclaims the vigour of his younger days after seeing how much Dream Alliance means to Jan. The actor’s warm rapport with Collette suggests a long-term relationship that has grown stale but, maybe, might be able to reignite.

To be sure, Dream Horse suffers from a problem that affects all movies about racehorses: The story’s principal athlete really isn’t aware of what’s happening around him, and his successes or failures don’t have anything to do with Jan’s melancholy. A more interesting film might have investigated the fact that, for as much as this syndicate has pinned their emotional well-being on Dream Alliance’s victories, they are actually powerless to control the outcome. Nevertheless, Dream Horse exudes such good feeling that it seems petty to point out that and the film’s other shortcomings. Like Dream Alliance, the movie’s got spirit and finishes strong.