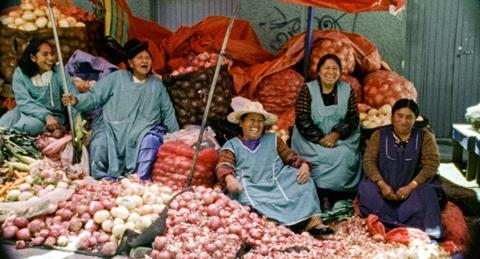 Filtering big ideas and social criticism through a dreamy if unflinching homage to the sights, sounds and people of La Paz, Kiro Russo’s El Gran Movimiento makes an unsettling, intriguing follow-up to his 2016 debut Dark Skull. Russo consolidates his visually gloomy, stylistically free approach, reprising many of the same themes but this time on a bigger canvas, suggesting that a repeat of Skull’s festival plaudits could be on the cards.

It’s a small miracle that such a stylistic pick and mix should cohere into something satisfying, but it does

In a five-minute prelude to this story about the city’s destructive impact on its inhabitants, told through the meeting of an ailing worker with a shaman, the camera slowly zooms in on construction work, traffic jams, torn posters and cabling as though La Paz were an immense, alien machine in perpetual motion.

One of its ground-down inhabitants is impassive former miner Elder (Julio Cezar Ticona, reprising his role from Skull and a non-pro like the rest of the cast), exhausted after a seven-day walk to the capital in search of work.

Mining has been unkind to Elder’s body; much of the film will chart his slow, painful decline, caused by breathing in coal dust, with Elder making heavy weather of carrying the crates around the local market. The formidable, kind-hearted Mama Pancha (Francisca Arce de Aro) tells Elder that he’s her godson, but he doesn’t recall her: the tragic suggestion is that modern life has turned the old woman into a matriarch with no family.

In the beautifully shot mountains outside La Paz, the camera carefully examines a grizzled, hard-smoking shaman called Max (Max Eduardo Bautista Uchasara), lost in the wilderness as he collects his plants and herbs. Time has been cruel to Max too, and back in the city the wildly cackling market women are not buying, telling Max that they no longer believe in his powers. This is the title’s ‘great movement’ - the shift from tradition to modernity, which leaves human detritus in its wake.

But Mama Pancha will try to revive the old ways by having Max work some of his ancient magic on the ailing Elder - magic that oddly seems to consist of Max puffing smoke into Elder’s battered lungs. It leads to a final frame in which the title’s full meaning is startlingly driven home.

As with Dark Skull, it’s all told with big gaps, and viewers will sometimes struggle to put it together. But Russo is less interested in working out plot details than in portraying a society straddled between old and new, which he achieves via a range of approaches ranging from the wildly abstract to quasi-documentary. It’s a small miracle that such a stylistic pick and mix should cohere into something satisfying, but it does.

At the symbolic end of things, we have Max’s chilling nightmare sequences, which close with a white dog looking ominously into camera, or a frankly insane, tightly choreographed dance insert featuring the market workers, wearing their traditional costumes, bopping around the market to cheesy techno-pop. To balance out the surrealism, there are moments of wry comic detail, as when Mama Pancha gently insists that a market boss put away his smartphone while they’re talking, or a fleeting image of a crate, clearly full of anything but authentic Nikes, with the swoosh crudely painted on.

La Paz, Max prophesies, ‘will crumble to dust’. And on the evidence of El Gran Movimiento, which was shot on Super 16mm in the city’s poorer quarters and under the challenging conditions of political conflict, the process is already well under way. The camera zooms slowly but relentlessly in on details of the decay, often shrouded in Russo’s signature shadowiness as though to suggest that these ‘invisible’ people’s lives are indeed all too hard for us to see and understand.

The terrific sound work by Mauricio Miguel, Peppo Razzari and Mercedes Tennina is worthy of note, working up the natural hubbub of La Paz into a clattering, grinding and humming symphony to the city.