Markus Imhoof follows refugees as they arrive in a hostile Europe, or ‘Eldorado’ 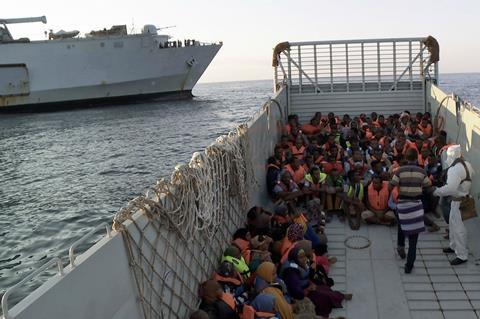 In the soft-spoken but hard-hitting documentary Eldorado, Markus Imhoof shows us souls in purgatory; refugees who may have survived the hazardous crossing to Europe from Africa, but are barely allowed to exist once they get there. One of the most moving statements to have been made thus far on the refugee crisis in the Mediterranean - along with Fire At Sea, to which it will draw comparisons – Imhoof’s gently-roaming camera holds a mirror to Western society, and it reflects a distorted and ugly face.

One of Imhoof’s more shocking, shaming revelations is the rampant influence of the mafia in the camps and shanty towns which surround them

With unusual levels of access to (the now-terminated) Operation Mare Nostrum off the coast of Italy, veteran documentarian Imhoof encounters the over-loaded dinghies bringing refugees from Africa on a desperate journey to the “promised land”, where they face even further peril. And Imhoof, who made the Oscar-nominated film The Boat Is Full in 1980 about the same topic of refugees, also lands his film into busy waters at its Berlinale premiere; many films have been made about this subject. But, mixing the personal with the observational, Imhoof delivers an impactful viewing experience.

During the war, Imhoof’s Swiss family repeated attempted to take in a starving Italian girl during the ‘kindertransport’ war years: much loved by the young Markus, aged eight at the time, 12-year-old Giovanna was sent back home to die hungry on the streets of Milan. In a fractured, meandering way, he brings that story to this film and onto the seas with the refugees. But pictures of shivering, unknowing black faces corralled into the hold of a giant ship, prodded, poked, housed in subterranean gaols and exploited ruthlessly by the mafia in their shanty tin shacks show an ugly, age-old truth: that of racism and slavery.

Imhoof provides no narration, but the images make the story clear. Critical acclaim seems certain to follow Eldorado’s launch at the Berlinale, and Imhoof’s 2012 doc More Than Honey was the most internationally successful Swiss film of all time and has made him well known. Certainly, although it’s hard to find audiences for a film like this, recent award-winning Syrian documentaries have proved that sections of the community are ready and able to face the truth of what is happening. Although the doc is certainly artful, a cable deal would help its fortunes enormously.

If there’s a narrative through-line in Eldorado, it’s Imhoof himself, and his memories of Giovanna and experiences today. Old photos and wounds are aired as he follows the refugees from sub-Saharan Africa off the boat and into processing. Well-meaning and deeply religious air workers of Operation Mare Nostrum wear Hazmat suits to staple numbers on the collars of the refugees in a giant processing ship which contains 1800 souls. Scenes of chaos accompany the rescue of the dinghies. A worker says: “We’re not going to promise you paradise, but every day is going to be better.” Unfortunately for most, that isn’t the truth.

One of Imhoof’s more shocking, shaming revelations is the rampant influence of the mafia in the camps and shanty towns which surround them. Illegal workers are paid Euros 30 per day to pick tomatoes; the capos take half the money and force the women into prostitution in sweaty tin huts. Worse, if it’s possible, is that the replacement for Operation Mare Nostrum has focused on diverting the dinghies into Libyan waters where an even worse fate awaits in prisons. The taste of those tomatoes and other Mediterranean garden produce suddenly isn’t quite so sweet.