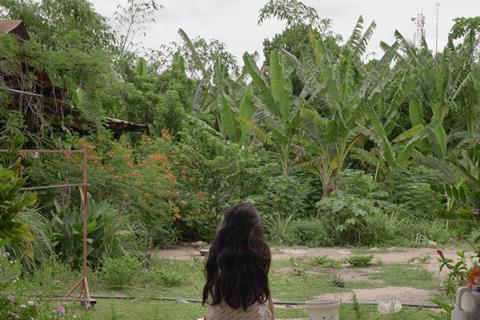 Autobiography and travelogue delicately intersect in Adeline Neary Hay’s tough but tender Eskape, in which the director retraces the scenes of her early childhood as a refugee from the ruins of post-Khmer Rouge Cambodia. Clocking in at the same economical 71-minute running-time as her 2018 debut Angkar, it functions most effectively as a heartfelt but commendably unsentimental tribute to Neary Hay’s resilient, resourceful mother Thany Lieng. Bowing in the new Envisions competition at IDFA, the quietly moving miniature should have little difficulty securing further exposure via festivals and small-screen outlets.

At its strongest when tracing the bonds between such women, celebrating their inner fortitude and their doughty instincts for survival

Early sequences sketch out the basic details of how Lieng and Neary Hay fled famine and political turmoil circa 1981 to shelter in unsanitary rural camps, first in Cambodia and then Thailand. They eventually made their way to the calmer environs of France, where Neary Hay would grow up and become a mother herself. During discussions about the film and its aims, Lieng makes clear that she has no desire to return to her homeland; the director thus makes the journey solo, exploring the atmospheric but very quiet locations of the once-teeming camps she inhabited as a baby and toddler.

The main locus of the film’s first half is the former site of Khao-I-Dang camp near the Thai border, set in lushly forested, hilly terrain. Neary Hay’s cameras (she shares cinematography credits with Philip Skoczkowski) prowl this area via a fluent deployment of drone and Steadicam technology. The latter niftily mirrors Lieng’s tendency towards perpetual onward motion towards safer havens; “I have to move forward at all costs,” she remarks.

The director, who has a sharp eye for composition, occasionally frames her shots to place herself in the lower middle of the widescreen image — from the viewer’s perspective she thus simultaneously becomes part of the landscape and a surveyor of it.

The sequences in Cambodia (in which the director explores “the collective dimension of oblivion”) have a sombre, brooding power; the shadow of overwhelming tragedy darkens even the most bucolic of vistas. Editor Marylou Verges maintains brisk, businesslike momentum here. The shift to France — where mother and daughter first found asylum in Leucate on the Mediterranean coast before relocating to Aulnay-sous-Bois in the characterless suburbs of Paris — is inevitably accompanied by a downshift in intensity.

The benefit is that the happy-go-lucky, occasionally prickly Lieng now returns to the film’s centre stage; in Normandy, enjoying swims in the chilly sea, and in Leucate a touching reunion with her now-nonagenarian benefactor Solange. Eskape (that unorthodox spelling is never explained) is at its strongest when tracing the bonds between such women, celebrating their inner fortitude and — especially in the case of mothers — their doughty instincts for survival. “Come on mom, you’re a warrior!” exclaims Neary Hay near the end; the final sequences are dominated by emotional and frank testimony from Thieng, via an interview conducted in unsparing but loving close-up.