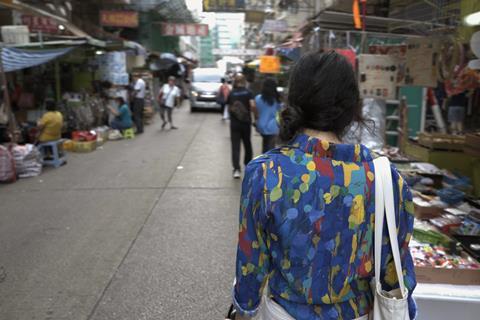 While the world has been masked for over a year during the Covid-19 pandemic, the people of Hong Kong hid their faces earlier, in response to a different crisis. Jennifer Ngo’s documentary Faceless focuses on the multitudes who donned masks and black clothes in 2019 to join the pro-democracy demonstrations against the imposition of harsh measures by mainland China. Highlighting four young activists who tell their stories, and are seen individually in the thick of the tumult, Faceless offers an urgent insight into not just a key geopolitical flashpoint of our age, but into the reasons why ordinary people mobilise to defend the life and the community they love. Premiering in Hot Docs, Ngo’s film is certain to travel widely in an era very much defined by acts of popular protest across the political spectrum.

Faceless introduces us to four individuals involved in the demonstrations, each anonymous but identified in captions by a nom de guerre. The Student is a young man who talks at the start about how his parents tried to steer him in the way of solid social conformity, urging him to stay apolitical. Instead, he became a passionately committed activist, and a substantial amount of the footage seen later is from his helmet-mounted GoPro camera as he moves, at no small risk, into the thick of the confrontations between demonstrators and police. The Artist is a young lesbian who contributes to an explosion of agitprop street art, and is seen creating poster images directly derived from photos of draconian police action. She also takes part in LGBT+ demonstrations and expresses her concern that the overall struggle for Hong Kong’s freedom might risk eclipsing other more specific causes that she supports (a nuanced plus point of Faceless is its willingness to show the doubts and contradictions accompanying its subjects’ commitment).

More personal insights come from the two other contributors, the Daughter and the Believer. The former is a young woman whose father is a police officer, and who movingly recalls having to face his fury at her activism. Revealingly, she talks about a childhood dominated by police culture, and of growing up in a world where the Hong Kong police force enjoys a particular sanctified status — very much at odds with the brutal actions we see its members performing throughout the film. Similarly experiencing a crisis of faith is the Believer, a young Christian man committed to non-violent protest but who, as the film progresses, is heard musing about the possible shortcomings of such a credo.

The personal testimonies of these four are interspersed with glimpses of other participants in the struggle, notably the so-called ‘Parents’ — older people who support the demonstrators and help supply vital equipment — and the ‘Navigators’, intelligence gatherers who map police movements and keep the demonstrators informed.

Structured chronologically, and built around occasional talking-head statements from the four key contributors, with occasional informative inserts of TV reportage, Faceless takes us through the events of 2019, ending — with bitter irony — on New Year’s Eve, with the Daughter wishing for a day when the masks can come off, just before they went on worldwide for different reasons. A coda shows the Student musing on the fight and the enduring trauma he and his peers are experiencing, with Beijing passing more repressive laws in 2020.

Director Jennifer Ngo — formerly a journalist for the South China Morning Post and a maker of current-affairs documentaries, notably for the BBC — has made a compelling but appropriately modest debut feature, giving the platform to her four contributors and to the protest movement in general, while eschewing editorial comment or stylistic rhetoric. The only exceptions to that, somewhat softening the film’s urgency, are a solemn and sometimes incongruously lyrical score, and a bookending with aesthetically shot cityscapes that feel touristic rather than evoking a sense of Hong Kong as a lived community.

Because Faceless is so carefully structured, and built from a variety of individual viewpoints, it doesn’t have the same immersive impact of last year’s somewhat rawer Inside The Red Brick Wall and Taking Back the Legislature by the anonymous collective HK Documentary Filmmakers, which focused on specific moments of the protests, experienced and photographed from the inside. However, while Ngo can’t go as deeply into individual episodes, she gives a strong sense of the development of the tensions between protestors and authorities, and — especially when showing us the police sieges of campuses, notably the Hong Kong Polytechnic University — conveys an indelible sense of the high stakes for demonstrators risking life and limb in the face of merciless policing. The end credits power ballad might ring slightly kitsch, but it does strike a note of positivity despite the dismaying realities that Ngo’s central quartet, and their city, have lived through.