'First Monday In May': Tribeca Review 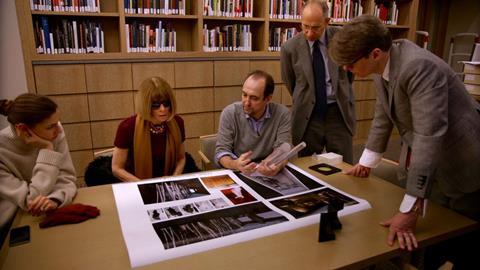 Documentary filmmaker Andrew Rossi has made a career from telling New York stories and gaining access to the city’s most rarefied institutions. Having lifted the lid on the most venerable newspaper in town with Page One: Inside The New York Times and gained access to the hottest restaurant tables with Le Cirque: A Table In Heaven, Rossi trumps himself with a ticket into the fashion event of the year. First Monday In May, an account of the run up to the Metropolitan Museum of Art Costume Institute’s annual spring exhibition and the celebtastic Met Gala fundraiser, is a suitably glitzy opener to the Tribeca Film Festival.

The Met Ball is second only to the Academy Awards as a red carpet rubbernecking event, so on frock power alone, this behind-the-scenes peek is guaranteed an audience. And although this film lacks the prickly drama of the Anna Wintour/Grace Coddington central relationship which made The September Issue such a compelling watch, Rossi’s impressive access grants us glimpses of a formidable roster of celebrity flesh. The lack of conflict or real insight could mean that the film’s theatrical prospects might be limited to fashion fans, however its appeal within that section of the audience will be considerable.

The film focuses on the 2015 event, ‘China: Through The Looking Glass’. It was the most ambitious show to date – an attempt to match the iconic reputation of the 2011 hit show ‘McQueen: Savage Beauty’. Rossi follows key members of the team behind the show, including curator Andrew Bolton, artistic director Wong Kar-wai, benefit co-chairwoman Anna Wintour, plus an army of terrified lackeys. Although Rossi attempts to inject a sense of peril – with just days before the deadline, the show is yet to be installed – it’s easier to believe that the entire museum team would sell their children into slavery rather than disappoint Vogue editor Wintour.

Wintour is great value as a documentary character. As one perceptive comment suggests, she plays the role of Anna Wintour brilliantly. “Andrew is a real visionary,” she says, inscrutably, of Bolton. “Our job is help him execute his creative genius.” We later see Bolton’s creative genius systematically dismantled by a few brutally decisive Wintourisms. Rossi emphasises Wintour’s fearsome reputation by cutting from a description of the Chinese ‘dragon lady’ female archetype (“She’ll devour you like a cat devours a mouse.”) to a sequence in which Wintour sweeps through the new Vogue offices, her displeasure wafting behind her like Chanel No 5.

The film touches upon some of the more contentious elements of the show – the spectre of colonialism; the cultural appropriation, the ethnic stereotyping – and poses the question of whether fashion can be art (answer: if it isn’t, you wouldn’t want to be the one to break the news to Wintour). There’s a fascinating moment when Wong viscerally reacts to Bolton’s rather glib idea of juxtaposing the jacket of Chairman Mao against a collection of ancient Buddha sculptures.

But, ultimately, the film lacks the humour and irreverence that might helped it break out to a broader audience. From the earnest score to the breathless talking heads to the atmosphere of awestruck reverence, this is a film which takes itself every bit as seriously as its subjects.