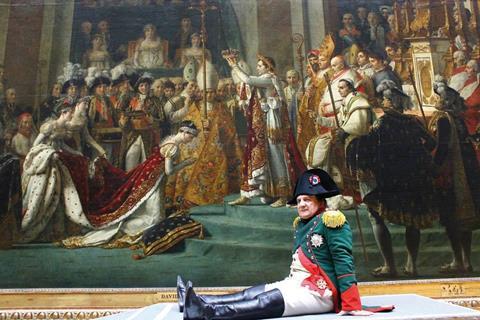 Aleksandr Sokurov’s Francofonia is rich, complex, challenging; a must for every serious film festival and a commercial challenge at the same time. More complex than Russian Ark, which displayed the glories of St. Petersburg’s Hermitage Museum, this philosophical essay on the relationship between history, war, art and art preservation offers so many options for interpretation that by the time it is over (and it’s only 87 minutes long), one realises that any attempt to deal with it in earnest requires a second viewing.

Sokurov is always vocally present, whether engaged in a conversation with Napoleon, or telling Jaujard and Metternich what is in store for them once the war is over.

Somehow inspired by Gericault’s painting The Raft of the Medusa, which is shown later on in the film, Sokurov uses here, as a metaphor, a ship carrying an entire collection of museum pieces across the stormy Atlantic. Among other things, the fate of this ship, which might have to unload its precious cargo into the ocean to save the crew, comes up several times throughout a dense narrative delivered by Sokurov himself in Russian (so much for francophonia) and bookends the piece.

Never much of a story teller, Sokurov nevertheless has a skeletal plot dotted throughout the film involving the encounter between Jacques Jaujard (Louis-Do de Lenquesaing), the director of the Louvre throughout the Second World War, and Count Franziskus Wolff-Metternich (Benjamin Utzerath), the man appointed by the German occupation forces to deal with France’s art treasures.

Though enemies, these two art lovers conspired between them to keep the Louvre collections intact, until the relationship resulted in Metternich being divested of his authority and sent back home to Germany in the middle of the war.

The two other characters roaming through the Louvre are both ghosts. One of them, Marianne (Johanna Korthals Altes), represents the French spirit in all its glory, as portrayed in Delacroix’s Liberty Leading the People.  She walks all through the film repeating the mantra of the French Revolution, liberte, egalite, fraternite.  The other ghost is that of Napoleon (Vincent Nemeth), who cockily parades through the palace he officially turned into the National Museum, claiming that everything in it, including Mona Lisa’s smile, is him. Sitting side by side, close to the film’s end, facing Leonardo’s masterpiece, this couple appears to represent for Sokurov the impossible and yet insoluble marriage of two concepts which can both create and destroy at the same time.

Feeling entirely comfortable in the frame of this learned lecture, in which the text is at least as important as the accompanying images,  Sokurov is always vocally present, whether engaged in a conversation with Napoleon, or telling Jaujard and Metternich what is in store for them once the war is over.

Time is flexible as well, as Sokurov traces the history of the Louvre from its early days, when the French moved into the area for fear of a Viking invasion, through the contributions of the famed 16th Century architect Pierre Lescot, responsible for shaping the Louvre façade as we know it now, to the present, with the glass pyramid in the heart of the courtyard sending visitors through underground passages to the various corners of the huge complex.

Expertly merging archive material and fictional sequences with footage doctored to look as if it was taken during the war, neither a documentary but not quite a fiction film (fiction is usually framed here by sound image on one side or film perforations on the other), Sokurov reflects on how much and how closely history and art are interwoven, from ancient times to the present.

The director never forgets for a moment his beloved Russian roots. At one point, he calls for the spirits of Chekhov and Tolstoy to wake up and later on, he points out that the Hermitage, Russia’s answer to the Louvre, was spared the Nazi scourge at the cost of no less than one million victims. Sokurov cuts in the image of a benign, smiling Stalin as his own personal commentary on history.