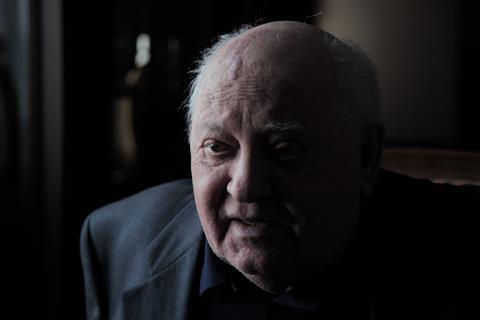 There are few political figures today who can remotely be called titans, but Vitaly Mansky’s new documentary, premiering in competition at IDFA, can genuinely be called a portrait of a titan at rest. Gorbachev. Heaven is an intimate view of Mikhail Gorbachev at 89, with the former leader of the Soviet Union looking back at a life that changed the world. Focusing on his own footage of Gorbachev, without the addition of archive material but with occasional photos, Mansky (Under the Sun, Putin’s Witnesses) doesn’t provide a high concentration of historical information, but instead conveys a vivid sense of Gorbachev’s own understanding of his life, and paints an engaging, somewhat tantalising picture of his character – showing him as tender and humorous but sometimes hinting at his darker qualities. The film is vital watching for anyone interested in modern history, and in the potential of documentary as a vehicle for intimate portraiture.

A film that evokes the isolation and decline faced by a man who was once all-important, but decided to step, irreversibly, outside history

The film begins in Gorbachev’s residence outside Moscow – a house that, we learn, he doesn’t own but was gifted to him by leaders of former Soviet republics. Affable but frail, and using a walking frame, Gorbachev engages with his assistant Volodya and his kitchen staff, and sits down to answer Mansky’s questions. Laer he moves to a hospital for treatment, but resumes the interview at the HQ of the Gorbachev Foundation in Moscow – a now somewhat diminished organisation, we learn, renting out much of its space. This is a poignant detail in a film that evokes the isolation and decline faced by a man who was once all-important, but decided to step, irreversibly, outside history; the images of the now vulnerable ex-leader offer a resonant vision of life after power that’s oddly reminiscent of Scorsese’s The Irishman, not to mention King Lear.

Mansky, off-screen, pursues a pugnacious and insistent line of questioning, in striking contrast to the simpering adulation which Werner Herzog showered on the great man in his soft-edged Meeting Gorbachev (2018). Mansky repeatedly pushes his subject on difficult topics, and his occasional evasiveness. Notably, he points out that Gorbachev avoids discussing the collapse of the USSR – “I fought to preserve the USSR,” Gorbachev keeps insisting – and asks why he won’t address the question of whether he ordered the Soviet Army to open fire in Baltic states. This in particular seems to send the otherwise sharply compos mentis Gorbachev into a momentary, perhaps feigned fugue, worrying over the withered skin on his arm. Such moments reveal his frailty, and at points Mansky arguably crosses the line into intrusiveness - as at the end, when the camera accompanies him to the grave of his beloved wife Raissa.

Oddly, Mansky chooses to flash up explanatory cards providing somewhat redundant footnotes about figures like Lenin and Stalin, but doesn’t explain other topics such as the aforementioned Baltic episode (Herzog’s film was a much more basic historical primer). Overall, however, the conversation is hugely revealing, as Gorbachev remarks on Ronald Reagan, whom he saw as “a real dinosaur” and, most disobligingly, on his bibulous successor Boris Yeltsin. Above all, we get a strong sense of who he was and is, and of his justifiable sense of his own importance. Asked which Soviet leader was really a Socialist, he says, “I was” – and laughs slyly at what Mansky will make of that. He also comments that while people may say that the Gorbachev era has ended, “I say it’s only just beginning.”

Rather than just focusing on corridors-of-power information, however, Mansky aims to capture Gorbachev’s character and a sense of the meaning, historical and existential, of his singular destiny. His humour, candour and joie de vivre are apparent: he quotes poets Pushkin and Yesenin, and gives full-voiced renditions of Ukrainian songs; he’s also seen joking with some theatre people who are preparing a play about him, and celebrating a quiet New year’s Eve at the flat of Volodya and his wife Tanya. His devotion to his late wife Raissa is a key theme – he cheerfully points out that he didn’t mind people saying he was henpecked, and notes that neither he nor Raissa were ever exactly ‘sweet’, as he puts it.

Her central place in his life is foregrounded by frequent shots of her portrait on his walls. Indeed, the film is shot by Alexandra Ivanova very much as an atmospheric, even poetic art piece, emphasising Gorbachev’s isolation among cavernous, wintry interiors, at one point showing him as a tiny figure framed in his office doorway, alongside a seemingly huge picture of the smiling Raissa. Viewers expecting an objectively informative political documentary may be shocked by how impressionistic, and indeed starkly beautiful, the film is. But one way in which Mansky goes too far in his own rhetorical intervention is in the background placement of TV screens showing Vladimir Putin, a constant overstated ironic counterpoint to Gorbachev’s comments.

Viewers can make up their own minds about the film’s subtitle ‘Heaven’. It perhaps suggests that, having brought about his own political and historical ‘death’, Gorbachev now enjoys the reward of immortality in his earthly afterlife. But, as he reminisces about the pleasures of nature and the smell of the steppe in his former posting in Stavropol in the 50s, Mansky asks, “Was that heaven?” – and Gorbachev laughs, “Now I’m in hell”.