'Have A Nice Day': Berlin Review 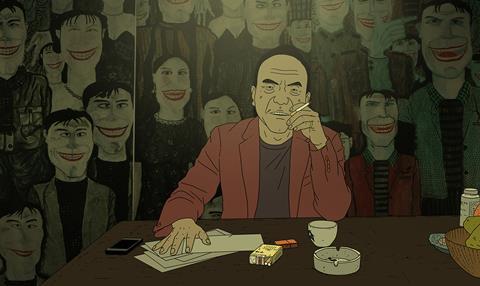 Liu Jian’s animation Have a Nice Day is at once a bloodthirsty genre thriller; a political statement about China, globalization and capitalism; and a vibrantly witty piece of postmodern pop art. In other words, it’s like no Chinese film you’ve ever seen. If you had to make comparisons, however, the film plays like a cross between No Country For Old Men and Jia Zhangke’s thriller A Touch of Sin, put through a coolly affectless quasi-anime filter; although the style and the approach are very much Liu’s own.

This is a stunning, provocative work that will get animation buffs buzzing

Liu, a painter and graduate of the Nanjing Art Institute, is best known for Piercing 1 (2010), single-handedly created on a table, and his new film pursues his artisanal approach in a very spare cel style. The film’s elegance and bleak narrative wit, along with politically caustic cynicism - impressively outspoken, given the rigours of the Chinese censorship system - should put Have a Nice Day in the international spotlight, with the potential to become the biggest success in adult-targeted art animation since Waltz With Bashir.

Beginning enigmatically with a quote from Tolstoy’s novel Resurrection, the film is divided into several chapters. Its story, set in a small town in Southern China, revolves round the theft of a bag containing a million yuan by a young driver, Xiao Zhang (voiced by Zhu Changlong). He plans to spend the money on a trip to Korea with his girlfriend, who needs corrective plastic surgery.

But the money belongs to mobster Uncle Liu (Yang Siming), a painter who has slept with Liu’s wife. Liu dispatches cold-blooded, super-efficient assassin Skinny (Ma Xiaofeng) to retrieve the money, but neither has reckoned with Yellow Eye (Cao Kou), an inventor of devices such as X-ray glasses, who gets his hands on the money. A panoply of double-crosses, traffic pile-ups and strokes of dumb luck turn the pursuit into a wild narrative zig-zag, which keeps tracking back to two locales; a seedy hotel room and the internet café where Xiao Zhang keeps in touch with his girlfriend.

While Have a Nice Day works narratively as a super-cynical thriller, the animation turns it into something else, providing a detached perspective in which the drama becomes both a philosophical tragedy - with the characters chasing their hollow desires to ultimately futile effect - and a savage commentary on contemporary politics and culture, and China’s place in a money-centric universe.

Some of the points made are specifically Chinese; the importance of the internet as a channel of communication, for example, or to people’s obsession with Western education as a status symbol. But this is also an acutely up-to-date commentary on the state of the world, with a wry comment about Brexit, a radio soundbite of Donald Trump, and a character quoting the philosophy of life according to Steve Jobs.

The film’s overall visual style, which in some ways closely recalls that of Estonian animator Pritt Pärn, is one of a flattened-out realism, with minimally-textured backgrounds often entirely static, colours often deadened to a range of greys and olives, characters smoothly but sparely sketched in defined outlines, and the iconography dominated by images of the squalid and the rundown.

But this basic approach allows for textural and chromatic variation: occasional bursts of neon light, the use of different media in glimpsed paintings and movie posters and, in one extraordinary stand-alone sequence, a lurid advert for a dream resort named Shangri-La, which drops in stereotypical images from Chinese history and Maoist iconography. The music is similarly pastiche-laden, running from cod 80s disco to a sort of revamped trip-hop.

The film’s major shortcoming is that the narrative eventually heads into a dead end, without providing the truly lethal final sting that Liu seems to promise. Otherwise, this is a stunning, provocative work that will get animation buffs buzzing, and will no doubt spark many an academic paper on Chinese postmodernism and its debt to Quentin Tarantino.