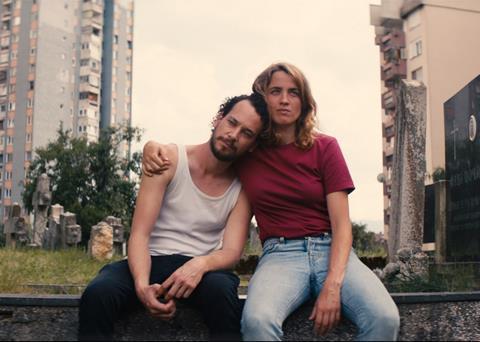 A meta-film about a search for a lost soul in Bosnia, Heroes Don’t Die is an eccentric French travelogue that is at once a fiction and effectively a documentary about its own making. Wearing its (presumably) micro-budget resources lightly and with ingenuity, this debut fiction feature draws on the Balkan experiences of writer-director Aude Léa Rapin, which resulted in prize-winning 2010 documentary Nino’s Place. Lively and clearly a labour of love, Rapin’s film requires a considerable leap of faith from viewers, which it doesn’t altogether reward in dramatic terms. Nevertheless, a typically energetic performance by French cinema favourite Adèle Haenel - essentially playing Rapin’s film-making surrogate - should give it some respectable traction with festival audiences.

The film begins in Paris where a frazzled young man named Joachim (a cheerfully bullish performance by Jonathan Couzinié, also credited as script collaborator) is videoed by his friend Alice (Haenel) as he tells her about a bizarre encounter he has had. A man in the street angrily accosted him, calling him a killer, naming him ‘Zoran’ and shouting out a date in the early 80s, Joachim’s birthday. This, together with the pictures of war drawn by a nightmare-ridden Joachim and a scrawl in Cyrillic on his arm suggest to the pair that the young Frenchman is the reincarnation of a man named Zoran who died on that day, and who lived in a Bosnian town named Bratunac.

Alice happens to know the place, having made a documentary there about genocide during the 1990s conflict. As a result, the pair decide to search for the mysterious Zoran, and head to Bratunac in the company of sound recordist Virginie (Antonia Buresi) and cameraman Paul, who films everything from this point on, and is therefore neither seen nor heard.

The team’s search is complicated by the fact that Zoran, as they’re informed, is the name of one in ten Serbian males – and also by their comically inept research methods, Rapin self-mockingly depicting Alice as somewhat clueless when it comes to documentary practice. At any rate, there’s much bickering among the small crew, with Haenel delivering the righteous irascibility that is something of a trademark of hers. The quest wavers between uncertainty, with the possibility that Joachim has made everything up, and absolute credence in the idea of his reincarnation, to often farcical effect.

This tonal imbalance, between goofy facetiousness and absolute earnestness, makes the film an unfocused watch, and as a travelogue unveiling Bosnia’s relation to its war-torn past, it doesn’t reveal that much that we haven’t seen in countless films before, either from the Balkans or elsewhere. Intermittently creating the impression of improvisation, the film uses professional actors to deliver its main dramatic heft, notably in a visit to a multiply bereaved woman who is a long-time acquaintance of Alice’s, played very affectingly by Hasija Boric (who has been described by Rapin as “a Catherine Deneuve of the Balkans”).

Much of the time, you can’t quite believe that any film-maker would actually require much of the material that Paul insists on filming – including Joachim in the shower, or struggling with a coffee machine – but that’s part of the film’s running joke, and DoP Paul Guilhaume captures it all gamely in the role of the invisible Paul. Like so many low-budget docu-fiction road quest narratives, however, this film doesn’t entirely persuade us that it knows where it’s going or why.