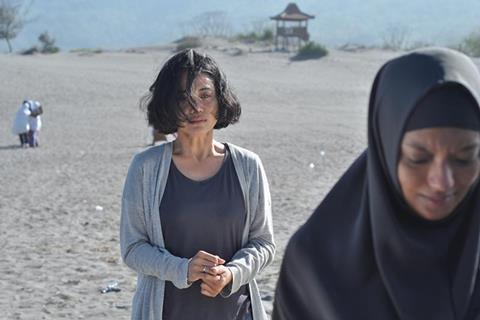 A couple are forced to confront the fractures in their marriage after they are involved in a fatal accident during the annual pre-Eid homecoming journey. The desire to make amends to the widow of the dead man leads to a series of increasingly uncomfortable encounters and the final realisation that, like their car — which ends up symbolically mired in sand — they have reached the end of the road together. A promising set up runs out of fuel fairly rapidly; the film fails to generate much in the way of sympathy for the couple or much in the way of a character for the widow.

The screenplay, like the journey, feels slightly aimless; littered with false starts and wrong turns

Adriyanto Dewo’s second feature film receives its world premiere in Maca0, in advance of its release in Indonesia in 2020. Like his debut picture, Tabula Rasa (2014), Homecoming can expect moderate festival interest, and will likely fare best theatrically with domestic audiences.

It is a few days before Eid and, like many urban Indonesians, Firman (Ibnu Jamil) and Aida (Putri Ayudya) are driving across the country to spend the festival with family. But the atmosphere in the car is chilly and Aida’s suspicions about her husband’s lack of fidelity deepen every time he sneaks off to covertly answer his phone.

Through the jabbing conversational attacks which charge the air between them, it becomes clear that Aida is infertile and her inability to have a child is a major source of conflict between them. They are also newly reunited after a trial separation, initiated by Aida but embraced (perhaps a little too enthusiastically) by Firman. Though the car journey forces them into uncomfortable proximity, as soon as they get out of the vehicle, Dewo pushes them apart, placing them at opposite sides of the frame.

The accident itself – a sickening jolt to the car, a moment of dread and panic – is effectively executed. A percussive score builds ominously. Aida, who is driving at the time, speeds away. But when the shock abates she is drawn back to the scene, and insists on following the ambulance to the hospital. Once there, Aida and Firman loiter ghoulishly, trying to extract information about the victim’s condition. After eavesdropping on the grief of the young widow, Santi (Asmara Abigail), Aida confronts the weeping woman to admit her guilt.

It’s around this point that the picture’s credibility falters. Aida and Firman follow the family of the dead man back to his village but, aside from a comment from one of the uncles, there’s never any acknowledgement that this is a staggeringly tactless and creepy thing to do. It is assumed that, although Aida was driving Firman is responsible as her husband. The local elders demand recompense. Firman slips a bribe to the police officer assigned to the case and tries to negotiate a lower pay off. It’s a potent image, this collision between privilege and poverty, in which the value of a dead man’s life is something which can be bargained down.

Meanwhile Aida privately approaches Santi to beg for forgiveness, and learns that her husband’s death is only one of Santi’s problems. For the young widow, recompense for the tragedy will come if Aida and Firman help her to leave the village. Along with her daughter and a male friend, Santi begs a lift in the now over-crowded car. The limitations placed on camera movement in the vehicle’s interior add to the oppressive atmosphere, but the story loses some momentum. The screenplay, like the journey, feels slightly aimless; littered with false starts and wrong turns. Meanwhile, the final act revelation about Santi’s plight is so clearly signposted early on that there is very little in the way of suspense or surprise.