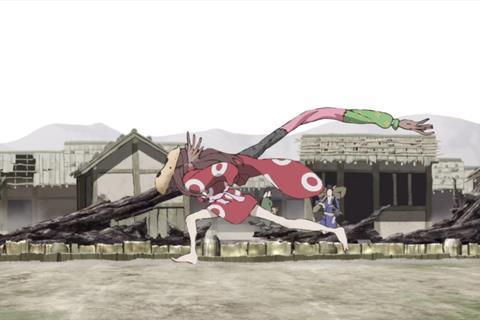 The latest from director Masaaki Yuasa is a fantastical tale steeped in Japan’s cultural history, taking a real life Noh performer who attained great popularity 600 years ago and weaving an allegorical tale around the mystery of his life. Based on the novel ’The Tale of the Heike: Chapter of Inu-Oh’ by Hideo Furukawa, the film ties the story of Inu-Oh who becomes a celebrated performer despite being born with horrific deformities, and that of Tomona, a blind musician who is Inu-Oh’s friend and collaborator. It’s a striking work, but one which might struggle to connect with audiences not well-versed in the very specific appeal of Noh performances.

An originality of approach should set it apart within the anime landscape.

Yuasa’s reputation and name will likely be a selling point for anime audiences. His previous films have won prizes at Annecy (Lu Over The Wall), Fantasia (Ride Your Wave) and Ottawa International Animation Festival (Life Is Short, Walk On Girl), among others. This picture, driven as it is by music rather than its somewhat opaque storytelling, is not as immediately accessible as some of his other work. Still, it has an originality of approach which should set it apart within the anime landscape.

Both Inu-Oh and Tomona are born into time in which storytelling – both in the tales which are told and the means of their telling – adheres to very strict parameters. One popular legend, which has been passed down as an oral tradition by generations of biwa (or lute) playing priests, is that of the defeat of the Heike samurai clan in 1185 at the battle of Dan-no-ura. Tomona and his family live near the site of the battle and are coerced by the lackeys of an avaricious shogun to dive to the wreck of a battleship and haul up a box. Inside is a sword which is so powerful in its magic that it instantly kills Tomona’s father and blinds Tomona. Meanwhile, Inu-oh is born with such alarming deformities that his family cover him up with a mask made from a gourd and cast him out of the house to live among the stray dogs. His presence is an offense to a clan which is dedicated to achieving beauty and perfection through dance and performance. But Inu-Oh has a gift – his dancing is pure and expressive. And with each dance, his abnormalities seem to lessen.

The friendship which grows between Inu-Oh and Tomona encourages both to accept their differences from the rest of society. Soon Tomona is wearing makeup and “a prostitute’s kimono”, cavorting about on stage bare-chested like some kind of 14th century lute-playing Iggy Pop. And Inu-Oh is electrifying audiences with his new, previously unheard stories of the Heike and his elaborately staged performances – one, titled ’Tumulus of the Arms’, about a mass amputation during a battle, is particularly striking.

But the Shogunate is not keen on gender-fluid lute players and performers who break from the proscribed legends of the Heike. Inu-Oh and Tomona are banned from performing in their unique style. One bows to pressure, the other tries to stick to his guns, in a final act which acts as a commentary on the creative process and the pressure to sell out in order to ensure mass appeal. It’s fair to say that in this singular piece of filmmaking, with its dense deep-dive into arcane legend and mythology, selling out is certainly not on the cards for Masaaki Yuasa right now.