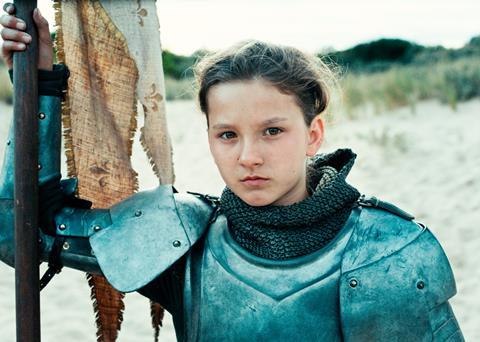 Just as Joan of Arc claimed to be guided by divine voices, French director Bruno Dumont has always followed promptings entirely alien to the usual logic of European art cinema. Starting out as an austere realist (The Life of Jesus), Dumont’s subsequent career has ranged from theological minimalism (Humanity, Outside Satan) to knockabout quasi-sitcom farce (his two P’tit Quinquin mini-series for TV).

A more conventional drama than its predecessor, but still intransigently individual

Arguably his most outré film, however, and the one likeliest to test even faithful viewers, was 2017’s Jeanette, an evocation of Joan of Arc’s childhood, set to an abrasive metal/EDM soundtrack and inspired, like this sequel, by the writings of early 20th-century poet Charles Péguy. Featuring a very different – and more easily palatable – musical score, Joan of Arc is in some ways a more conventional drama than its predecessor, but is still intransigently individual. Yet even with a subject as eternally popular as Joan, it’s hard to imagine the film making waves with a mainstream audience or bringing new revelations to Dumont’s long-term followers.

The story begins in 1429, with Joan (Lise Leplat Prudhomme) clad for battle as she leads the French army against the invading English, and waits to launch an assault on occupied Paris; it ends two years later with her at the stake. In other words, Dumont is covering ground familiar from a host of Joan films, whether austerely high-minded (Dreyer, Bresson, Jacques Rivette) or glossily spectacular (Luc Besson). Dumont’s approach, while it has much in common with the severities of the former school, is entirely his own. The action begins on a windswept stretch of sandy heath, where nobles and hard-bitten soldiers in armour (one of whom later takes a comic tumble off his horse) debate the course of the conflict with Joan, who resists their doubts with a steely glare.

Later, Dumont evokes the war sparely with an extraordinary equestrian ballet, as the French cavalry go through their pre-battle paces – sometimes shot directly from above as the horses form elaborate patterns, it’s a mesmerising sequence, giving the film a flavour that’s equal parts Brecht, Bresson and Busby Berkeley.

The longest and most testing sequences, however, show the clerical court ranked against Joan in her heresy trial; these are staged imposingly in the luminous vastness of Amiens Cathedral, its vertiginous verticals and patterned marble floor providing an august beauty that’s starkly captured by DP David Chambille. These sequences, however, are gruellingly prolix and performed most eccentrically by a typically Dumontian group of non-professionals with unconventional mannerisms. Many of them are intensely watchable, but sometimes bring the film a jarring tone of amateur dramatics: foremost, however, is Fabien Fenet, in real life a bookseller, who mixes singular comic mugging with the vocal tones of a Northern French version of Stephen Fry.

The cathedral scenes also feature a genuine coup de cinéma in the form of a featured appearance by Christophe, the revered, weird, veteran of French chanson, who at 73, combines the voice of a choirboy with the weathered face of an ancient druid. He also provides the film’s lushly heroic score, combining electronics, orchestrations and piano; and in an extraordinary early sequence, he voices Joan’s thoughts off-screen, as she muses on the violence of war, staring hypnotically at the camera.

Dumont’s boldest move, and the one that provides the film’s emotive drive, is the casting of 10-year-old Lise Leplat Prudhomme as Joan. She was the younger Joan in Jeanette, and more than lives up to the role’s iconic dimensions, partly because of her seraphic looks and clear, defiant gaze, which confronts the men around her like lasers set to full power. Her performance could called one-note, in that it’s consistently forceful and often shouty, yet it has an indomitable power that’s quite extraordinary – and her ability to fire off huge chunks of complex and precise dialogue is quite formidable.

It’s her presence as an embodiment of innocent, unbending will that gives the film its most persuasive meaning. Joan has consistently been a figurehead for the French right, but here she very much embodies resistance to religious intolerance, while in terms of gender politics, there could hardly be a more extreme example of a woman’s persecution by the massed ranks of the patriarchy. Theological themes are present too, notably in the early appearance of the bloodthirsty general Gilles de Rais, whose feral bearing suggests a satanic counterpart to Joan’s angelic will.

Screenplay: Bruno Dumont, based on works by Charles Péguy