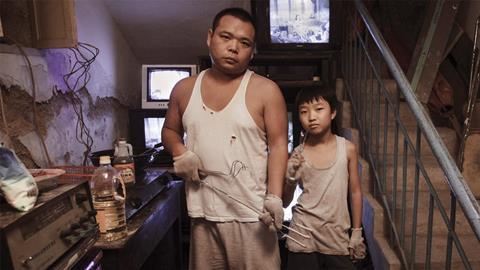 A parent-child relationship is tested when a father channels the passion for cinema he shares with his young son into a thriving bootleg DVD business in the second China-set comedy by Australian writer-director Sam Voutas. It combines something of the scrappy DIY aesthetic of Michel Gondry’s Be Kind, Rewind with a touch of the joy of discovery found in Giuseppe Tornatore’s Cinema Paradiso, yet a simplistic moral message and an underpowered third act mean that the film doesn’t quite deliver on its engaging early promise.

The comedy here is of the gentle, amiable variety.

This is a rather more polished and sophisticated picture than Voutas’ first Mandarin-language outing, Red Light Revolution, a robust farce about a down-on-his-luck Beijing resident who triggers local upheaval when he opens a sex toy emporium. As such, King Of Peking, which was partially funded by a Kickstarter campaign, should at least hope to match Revolution’s healthy festival run.

Likewise, this film’s marketable combination of cinephile sentiments and a cute kid should mean that theatrical prospects should be more promising than those of Revolution, which opened to muted reviews in the UK and Canada, but was streamed to phones and mobile devices in China by online video provider Tudou.

This story of father and son named Wong (Red Light Revolution star Zhao Jun plays Big Wong, Wang Naixun is his son Little Wong) is divided into five chapters, the first introducing us to this enterprising father-son double act. Big Wong, an itinerant projectionist equipped with an ancient Soviet-era portable reel-to-reel projector, sets up one-off screenings in playgrounds and schoolyards. Little Wong pelts around the side streets, a fast-moving mobile advertisement for a “Hollywood blockbuster for a buck.”

Projecting into a bed sheet, with the soundtrack playing through an ailing cassette player, Big Wong caters to an undemanding audience. The returns are commensurately low, particularly when the equipment catches fire. But Big and Little Wong are a team, trading Lethal Weapon quotes and testing each other’s soundtrack knowledge, which informs the playful lo fi mix tape of a score.

But the simple pleasures of life are under threat. Big Wong’s ex-wife wants either custody of her son or a substantial payment from Big each month. Big is forced to take a menial job in a cinema, living in a storage room under the screen. But it’s here that he has a brainwave. Equipped with a camcorder, a penguin-shaped rubbish bin and a job lot of outdated DVD recorders, he starts his pirating empire. For a while, the father/son double act thrives. But when Little Wong is caught copying a fellow student’s test paper, he realises that his father’s example might not be the best one to follow.

The comedy here is of the gentle, amiable variety. Some of the most effective moments come courtesy of the officious cinema security who drills the employees every morning with the company motto: “Friendly service, diligent work, no stealing, keep your fly zipped.”

Perhaps appropriately for a film about camcorder pirating, the documentary-style camerawork is shifty, nervously darting around each scene. A slight murkiness to the picture quality means that the evocatively junk-strewn production design doesn’t shine as much as it could.