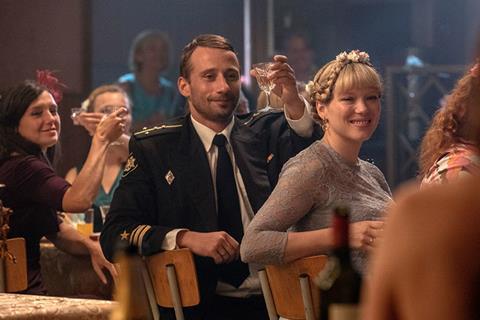 Thomas Vinterberg continues his studies of ordinary communities tested by extraordinary circumstances in Kursk, a based-on-fact story of two unfriendly nations, a crippled submarine, and a single, determined officer just trying to keep his crew alive.

Premiering at the Toronto International Film Festival, and boasting an international cast of stoic heroes, it’s nonetheless a slow-moving English-language drama that may need more than the guest-star appeal of Colin Firth and Max von Sydow to connect with mass audiences.

Set during the early days of Vladimir Putin’s first presidency, Robert Rodat’s screenplay kicks off with a working-class wedding reminiscent of the one that began The Deer Hunter – the sort of celebration where romantic ceremonies are a distraction, and boozy vows of eternal brotherhood remain the real main course. Afterwards, the men leave for a scheduled naval exercise, with their submarine – the Kursk – set to fire a few test missiles. But the ship’s torpedoes go off prematurely, blowing up most of the bow. All is lost, apart from the nearly two dozen men that one surviving officer, Mikhail Kalekov (Matthias Schoenaerts), manages to sequester in the sunken sub’s stern

As it did back in 2000, the disaster soon becomes a bureaucratic nightmare, with the Russian government refusing to lose face – or any technological secrets – by letting nearby foreign ships assist in the rescue. Yet Russia’s own, outdated equipment clearly isn’t up to the task. Time is ticking by, and the sub is slowly filling with water.

Less Das Boot than K-19: The Widowmaker, this is a submarine movie sans any cat-and-mouse pursuits or hold-your-breath escapes. Instead, it’s largely a waiting game, a tale of dutiful heroes and dithering officials. (Curiously unmentioned is Putin himself, who spent much of the crisis avoiding it, for which he faced sharp criticism.) That leaves Vinterberg with a static story, which he tries to keep moving by cutting among three separate narratives.

In one, the sailors’ families – led by Kalekov’s pregnant wife, Tanya (a fiercely committed Léa Seydoux) – press an unresponsive government for answers. In another, a resolute British Navy (personified by a never-more-British Firth) tries to win over the Russian Navy’s suspicious old guard (embodied in a never-more-medieval von Sydow). And in the third, Schoenaerts’ unshakably capable Kalekov does all he can – including a daring dive into one of the flooded compartments – to try to keep his men alive.

As much as they have studied small communities, many of Vinterberg’s recent films have also watched them yield to their worst elements – the gossipy townspeople of The Hunt, the hidebound villagers of Far From the Madding Crowd, the backbiting housemates of The Commune. So what’s remarkable here is how tightly knit this group of sailors remains. Beyond an obligatory scene of hysterics, this is mostly a story of silent grace under pressure.

Yet stoic endurance doesn’t always make for excitement, and cramped interiors tend to constrain chances for great visuals. After the first hour, the film begins to take on water, too. Meanwhile, Vinterberg’s most striking artistic decision – to suddenly expand the frame in the middle of the film, and have the scenes at sea go to a full 1:2.35 ratio – seems counterproductive. Wouldn’t it be more logical to shrink those sequences to a boxier format instead, to emphasise the confined, claustrophobic conditions?

There is some spectacle, particularly the initial explosions that nearly rip the submarine in half. Schoenaerts and the rest of the actors – including the late Michael Nyqvist, in one of his last roles – give quietly understated performances. And Seydoux’s full-throated, teary-eyed denunciations of duplicitous authority figures are absolutely thrilling. But too much of Kursk revolves around scenes of sodden sailors sitting around wondering why someone doesn’t just hurry up and rescue them. A sentiment likely to be shared by some audiences, as well.