Lillian, a Russian emigrant in New York whose visa has expired, decides to walk the long way home 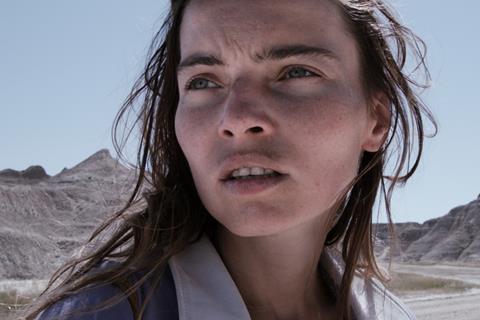 Who hasn’t entertained the thought of heading towards a far horizon and just walking ever onwards until nothing else matters? In Lillian, a young Russian woman in New York decides that she will simply walk home. Her incredible journey is the starting point for a meandering, slow-burn of a road movie marked by awe-inspiring images of natural beauty and quirky, low-key encounters. Uneven but never uninteresting, it is the kind of film that slips under the skin.

For his feature fiction debut, director Andreas Horvath - who has made several documentaries - takes his inspiration from the true story of Lillian Alling, an Eastern European immigrant to North America who left New York by foot in the late 1920s and headed west. Her ultimate fate is unknown but it is thought that she may even have reached Russia.

In his version of the story, Lillian (Patrycja Planik) has overstayed her visa in America. In a moment of desperation, she applies for work in hardcore adult films but even they refuse to hire her without proper documentation. We learn nothing more of her previous life in Russia. Advised to return home, she starts to walk. In the course of her journey, she frequently seems to be the only one on foot in deserted little towns and crowded motorways. She has the look of an intrepid pioneer or a stranded alien.

Slipping off the radar of mainstream society, she survives by scavenging for discarded food, shoplifting in thrift stores, washing in restrooms and breaking into abandoned homes. She steals a shirt from the back of a scarecrow, pilfers ripe corn from a field. Along the way, she travels through an American heartland that is slightly forlorn and scuffed around the edges.

Horvath’s documentary roots frequently surface throughout the film. Radio reports of the changing seasons provide the background noise to Lillian’s travels. Climate change is shown in communities hit by storms and flooding, the unbearable humidity of record breaking summer temperatures and the sudden hail storms. Horvath has a fondness for eye-catching road signs that ask “ Where Is Your Family ?”, warn that “ Girls Don’t Hitchhike On The Highway Of Tears” or encourage you to “Smile! Your Mom Chose Life!”.

This is the America of a plaintive Springsteen song or a folksy Garrison Keillor broadcast. Communities celebrate their veterans and endure their sorrows.

Nothing intensely dramatic happens to Lillian. One bothersome truck driver is easily outrun. She discourages conversation and just keeps focused on the way ahead. Strangers are considerate towards her - a police officer gives her a coat, and even a grizzly bear keeps its distance as it hunts for salmon struggling to swim upstream.

Inevitably, as Lillian drifts, the film also feels a little aimless. Could it be more of an art installation than a feature film? Yet, there is always something to retain your interest. The film is impressively shot by Horvath himself and has moments of imposing beauty. Lillian’s angular face bathed in the glow of Independence Day fireworks and her clear vision of the northern lights linger in the memory. The more Lillian heads into the winter wilderness the more attractive the film becomes. Ultimately Horvath manages to find an epic grandeur in the simple story of a woman just trying to make her way home.