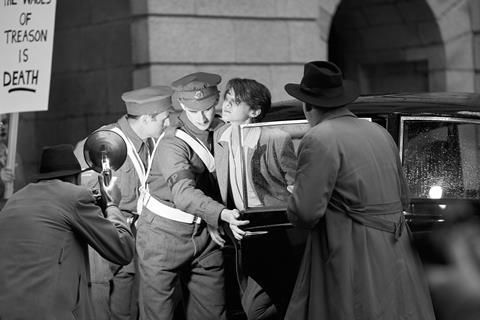 Known as a visually inventive talent through his acclaimed short films (The Girl With The Mechanical Maiden), Ireland’s Andrew Legge keeps his reputation intact with his debut feature LOLA, premiering in Locarno. The simple, broad-strokes premise for this 80-minute film (conceived by Legge) and resulting script (by Legge and Angeli Macfarlane) may not be grounded enough for the amount of bells and whistles Legge has attached, but there’s enjoyment to be had watching this what-if found footage feature set in 1941 England as the Second World War reaches its crux.

Legge takes the risk to add conceit in the space where characterisation normally resides. He positions LOLA as an assemblage of footage discovered in the cellar of an English country house in 2021. It’s a distancing technique which requires some voice-over contextualisation (‘Thom, I hope this film will find you and stop you’) on the part of Martha, or Mars (Stefanie Martini), which continues awkwardly throughout. Mars turns out to be an amateur filmmaker whose black-and-white footage dates from 1938 when her brilliant sister Thomasina (Thom, played by Emma Appleton) switched on her invention LOLA, a machine which can connect to radio and TV broadcasts from the future.

The discovery is initially euphoric — watching David Bowie sing ‘Starman’, knowing the words to The Kinks’ ‘You Really Got Me’ — but when the sisters start to dabble in the war effort and change the order of events, the future begins to backfire (Britain is invaded, Stanley Kubrick is never born).

Legge comes into his own as the plot develops, pitting his considerable skills against archive footage. LOLA can be very creepy indeed, especially when Legge starts to manipulate old newsreels to watch the rise of Mosley and the defeat of Churchill. LOLA is conceptually sharp, with wonderful period sound work augmented by the creation of an aural landscape for a fascist regime (alternate-reality pop anthems include ‘To The Gallows’ and ‘The Sound Of Marching Feet’). And Neil Hannon’s score is just one example of where LOLA punches over its budgetary weight.

Yet this dystopic vision may come a little late for some viewers, after a confusing first half squandered in the grounds of a country home (exterior shots only) where Thom and Mars reside alone after the death of their parents. Drunk on Brideshead and Love In A Cold Climate imagery, the film stubbornly refuses to ground itself in a reality for its two central characters. They quaff wine in a bath; they quaff wine at a picnic; they quaff wine to the point where it seems like the film is going to be about two orphan alcoholics. Suspension of reality is a given, considering the nature of LOLA itself, but Mars’ weavy handheld camera and access start to look a little too implausible, even for the dark fairytale that this is. Martini and Appleton, young British actors who have both found success on TV, have presence and watchability but, unfortunately, no real opportunity to develop their characters, confined as they are to abrupt clips shot at odd angles and projected in Academy ratio.

Legge certainly proves that he has the skills as a visualist to work over feature-length, and although it’s hard to pinpoint an audience for LOLA, streamer interest is likely. But the imbalance between the sketched, what-if nature of the film and the weight of its visual wizardry is keenly felt. One hopes that the Legge of the future works to balance his talent out between all the departments.