When a promising baker dies, her family and friends join together to open her dream cake shop 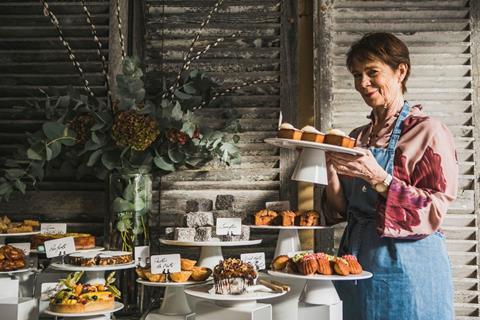 Bereavement unites three generations of women in a commercial baking business which offers newfound understanding, romantic opportunities and a celebration of multiculturalism. Love Sarah is a well-meaning exploration of female friendship, and of the cultural significance of cuisine. Yet the under-developed story leaves us with the sense that this is little more than a foodie instagram feed with a narrative attached.

Like its lip-smacking kitchen creations, the film is attractive but insubstantial

The appeal of gorgeously-photographed cakes is not to be underestimated, but it remains to be seen whether this is enough to draw audiences to this amiable but somewhat bland confection. Following on from its premiere at the Glasgow Film Festival, the film is scheduled for a spring release in the UK. Perhaps tapping into Great British Bake Off fever, the film has also sold to several European territories and Australia/New Zealand.

The eponymous Sarah is at the heart of the film, but, since she dies in a pointedly telegraphed cycling accident at the very start of the picture, we only get to know her through the women (and man) who knew and loved her. The women are her daughter, Clarissa (Shannon Tarbet), a dancer; her estranged mother Mimi (Celia Imrie), a former circus proprietor and performer; and her best friend Isabella (Shelley Conn), her business partner in the West London bakery which they hoped to open.

Sarah’s tragic death seems to scupper the bakery plan before it has even taken root. Of the pair, it was Sarah who was the chef who “trained with Ottolenghi”. But rather than see the premises taken over by a pop-up wine bar, impulsive Clarissa argues that they should push on with the project. Mimi, guilt stricken about refusing to help her daughter in the past, comes in as a partner. And a chef, Matthew (Rupert Penry-Jones), offers up his services, but his motivation for joining the business might not be all that it seems. He was, after all, the late Sarah’s ex-lover.

Like Matthew’s lip-smacking kitchen creations, the film is attractive but insubstantial. The production design taps into the kind of moneyed boho aesthetic which makes everything look like the inside of a Portobello Road bric-a-brac boutique. There are several romantic subplots: Isabella and Matthew spark intermittently together and Mimi forms a friendship with Felix (Bill Paterson), a local eccentric and inventor. But it’s hard to feel particularly invested in either relationship, since both feel more like convenient plot devices rather than genuine emotional connections.

Likewise the question of whether or not Matthew is in fact Clarissa’s father. There’s more tension in a scene in which Isabella tries to make a Japanese green tea pancake stack concoction than there is in the paternity test reveal.

Performances are mostly solid, with Imrie in particular giving a nicely textured turn as an abrasive and difficult woman who is learning, through her forays into the cakes of the world, to open up to the people around her. But ultimately, the meringue-light plot under uses her, as it does the rest of the cast.