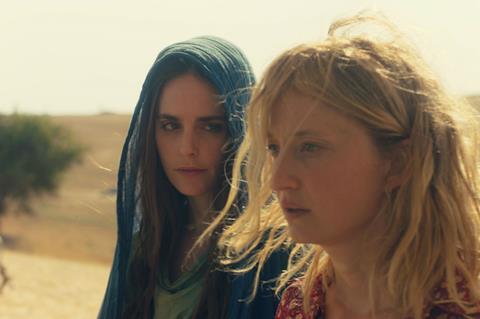 Leaps of faith require considerable divine intervention in Lucia’s Grace (Troppa Grazia), a likeable, modest comedy from Gianni Zanasi. The warm glow of the sun-baked Tuscan locations and the star presence of Alba Rohrwacher and Elio Germano could draw audiences, especially in Italy, to what is a pleasant if mild-mannered affair.

Lucia’s Grace does provide a strong showcase for the range of Rohrwacher’s talent, displaying her skill with physical comedy and her ability to invest her character with emotional conviction. Lucia (Rohrwaher) is a land surveyor beset with crises as her relationship with electrician Arturo (Elio Germano) falters, her daughter Rosa is turning into a distant, rebellious teenager and her finances are none too secure. Hired by name for a job, she is encouraged to turn a blind eye to inconsistencies in the mapping of a swathe of countryside. If the building project is to go ahead, it will provide jobs and security for many. Can she live with herself if she refuses to rock the boat?

It is at this point that Lucia receives her first visit from the Virgin Mary (Hadas Yaron), a dour, rather aggressive figure. She seems to appear from nowhere and Lucia assumes she is a refugee in need of money or food. The Madonna disabuses her of this notion, insisting that it is now her duty to ensure that a church is built on the site of their first encounter.

The meetings continue with the Madonna growing more insistent in her demands and Lucia wondering if she is losing her mind or gaining a moral compass. The fact that the Madonna is visible only to Lucia adds to the comic possibilities. One heated confrontation is observed, slack-jawed by others as Lucia appears to be thrown to the ground, pulled by the hair and slapped against the window by some invisible force. Could an exorcist be the answer to her problem?

The solution to the bigger question of faith is found in trying to resolve the other problems in Lucia’s life and trusting the better instincts of herself and the ones she loves the most.

Smoothly assembled by Zanasi, Lucia’s Grace was filmed in Viterbo, an area that seems to exist in permanent sunshine. Cinematographer Vladan Radovic bathes events in a warm glow and there is almost a fairytale quality conjured by the blazing heat and a fondness for bright, cheering colours.The walls of Lucia’s house are a riot of deep, warm blues and hot reds, the fields nearby are golden as far as the eye can see and the skies sparkle and shine.

Zanasi also keeps the film grounded. The appearances of the Madonna and the reactions of those around Lucia could so easily have lent themselves to hysterical farce or whimsicality. Instead, he tries to keep everything as realistic as possible, showing the situation as the catalyst for an outpouring of understanding, love and compassion. All of these qualities mean that the film is hard to dislike even if it never amounts to more than a pleasing, good-looking diversion.