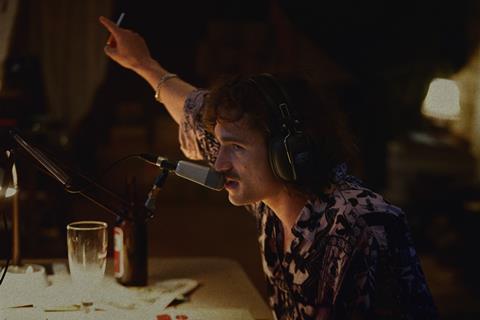 The early 1980s: there’s a burst of post-punk creativity in the cultural landscape – a rebellious DIY energy which seeps into everything from rock music to publishing to pirate radio. It’s this latter which provides an outlet for brothers Philippe (Thimotée Robart) and Jerome (Joseph Olivennes), an escape from the provincial backwater in Brittany where they live in prickly disharmony with their father. Breton-born director Vincent Maël Cardona crafts a vividly drawn love letter to analogue technology and captures a moment in cultural history poised on the brink of seismic change.

Inventively glitchy sound design and a well-chosen soundtrack bring a distinctive personality to a film which combines a coming of age story, a love triangle and a persuasive sense of time and place. It’s an accomplished debut from Cardona, who co-penned the screenplay with a collective of writers, all of whom were born around the time in which the film is set. Not actually having lived through the period is clearly no impediment, however it perhaps accounts for the film’s slightly romantic view of the cultural impact of the early 1980s. Charismatic young actors in the central roles - Olivennes is the son of Kristin Scott Thomas - will likely add to the film’s appeal both to further festival audiences and, potentially, to arthouse distributors on the hunt for younger audiences.

The device of a narration – Philippe talks to his brother, recounting the story of an eventful few years in their lives – is one of the more conventional choices in a picture which is at its most interesting when it is at its most playful. That sense of fun is evident in the grainy home video footage of the 1981 French elections which saw Francois Mitterrand, the first socialist president of the Fifth Republic, gain power. “Between two clowns, I always chose the socialist,” says one cynic. But the celebrations that follow the election result are genuine and full-throated.

The core of the film is the three way relationship between the two brothers – Philippe with his elfin, changeling beauty and Jerome with his swagger and confidence – and sultry Marianne, but another key presence is Edouard (Antoine Pelletier), a fellow outcast in the “land of muscles’’ whom Philippe meets during his military stint. Edouard is less successfully realised as a character – his plan to use his family’s money to set up a multimedia company is a none-too-subtle nod to the commodification of culture and the digital future of the arts.

The film’s inventiveness is particularly evident in the soundscape, notably in a brilliant scene in which the bashful Philippe commandeers a British army radio station in Berlin and improvises a coded message of love to Marianne through the medium of a live experimental audio sculpture. Production design is also strong – the brothers’ family home, with its too-narrow corridors and too-oppressive wallpaper, is decorated in a way which seems designed expressly to crush the joy out of life.