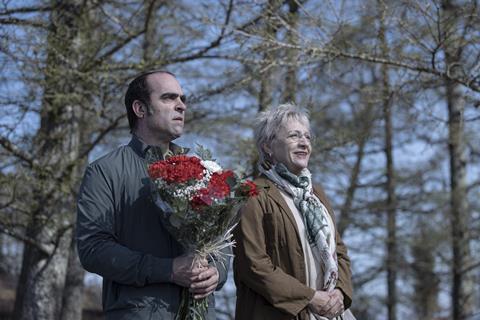 Maixabel ends with a bunch of middle-aged people singing a Basque song on a hillside. That might not sound thrilling, but it’s testimony to the film’s emotional power and thoughtfulness that viewers will find the scene pin-drop gripping.

Iciar Bollain’s beautifully judged and sensitive exploration of the emotional fallout of terrorism works up a short-lived Spanish political reconciliation project from the 2000s into a film which looks on paper like textbook preachy, ‘politically committed’ fare but whose universal guiding theme is that the true enemy is never the other side, but rather our hatred of it. As such, the surprisingly accessible Maixabel deserves international exposure in territories beyond Spain, where it will be understood most deeply.

The script is based on historical events. In 2000, Basque politician Juan Maria Jauregui was assassinated by the Basque independence group ETA. Ibon (Luis Tosar) and Luis (Urko Olazabal) are two of his killers: the lakeside revelation of the news to Jauregui’s daughter Maria (Maria Cerezuela) as she plays with friends at a summer camp is the first of several soul-wrenching set-pieces.

We fast forward to 2011, with Ibon and Luis now imprisoned and Jauregui’s wife Maixabel (Blanca Portillo) leading a group for terrorist victims. Maixabel’s decision to publicly memorialise all terrorist victims, regardless of political persuasion, is being questioned by her colleagues, but her refusal to see things in black and white is what sets the film’s moral tone, and the script takes its lead from her principles.

Maixabel’s view finds an echo on the terrorist side: the script is all about turning up similarities where many see only differences. Ten years on, Luis and Ibon are older, wiser and profoundly unhappy: their rejection of their old ideals is making things tough for them both inside prison and out. When a government initiative for ‘restorative meetings’ between terrorists and their victims is mooted — a real-life scheme that was swiftly brought to an end with a change of government — Luis decides to go for it, but not before an on-screen debate, of the kind beloved by Bollain and her cinematic mentor Ken Loach, has taken place among the prisoners and their moderator Esther (Tamara Canosa), challenging the viewer to grapple with the political and ethical issues.

The long-term, ripple-down effects on Maixabel and Ibon, and crucially also on their families, as represented by Maria and Ibon’s mother — his abandonment of the cause means that she is the only person he has left, and even that relationship is poisoned — are handled with due skill, sensitivity and, crucially, balance. But it is Luis’s and Ibon’s supercharged face-to-face encounters with Maixabel on which the film is built. Maixabel’s dignity and suffering are superbly rendered by Portillo, while Olazabal and Tosar deliver contrasting portrayals of violent men in search of redemption, the former internally broken from the outset, the latter perpetually on the verge of exploding with self-directed rage.

Perhaps the strongest element of Bollain’s screenplay, cowritten with Isa Campo, is the precise (and thankfully straightforward) manner it goes about setting out for the viewer just what is at stake here — in a country where the ghost of terrorism is still very much present, these are are high. Spain prefers to bury its divisions rather than debate them, and even in 2021 it’s no surprise that comments made by Tosar following the film’s San Sebastian press conference have led to Twitter calls by a few for boycotts of the actor’s movies.

In seeking understanding, though perhaps not forgiveness, for people whom thousands consider to be simply murderers, Maixabel is committing itself to an ethical high wire walk that it pulls off superbly. Maixabel, like the viewer, is stunned to learn that her husband’s killers basically had no idea who he was. If one drawback can be found with the film, it’s the tendency of Alberto Iglesias’s score, attractive in itself, to underline too heavily the emotion. The director, script and actors have already generated all the necessary power. And there is one emotional twist still to come: back on the hillside, one of the singers is Maixabel Lasa, Juan Maria Jauregui’s real-life widow.